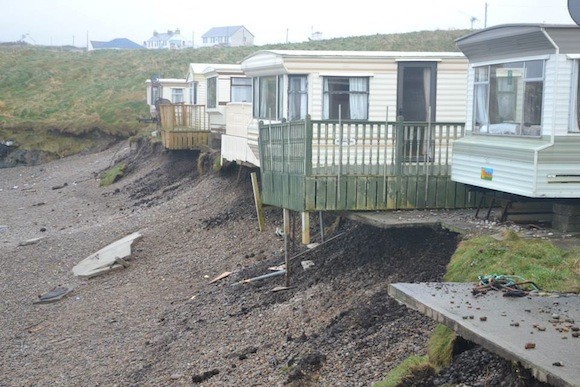 The picture shows how close the mobiles came to having the ground washed away from beneath them.

Three mobile home-owners had a lucky escape when their properties came within inches of being washed away by yesterday’s storms.

The mobile homes now hang perilously close to the edge of a steep embankment on scenic Portmor Beach in Malin Head.

A rescue operation has been organised and a large crane is due on site to pull the mobile homes back from the edge.

The close call came as a high tide occurred on the Inishowen beach during yesterday’s storm.

Thankfully there was nobody in any of the three mobile homes at the time.

There was some small damage caused to some of the mobile homes and some concrete paving was washed away.

One eye-witness said “It was pretty scary because it looked at times as if the tide was going to come even further.

“The mobiles will have to be pulled back and I understand a crane is due on the site shortly.

“There was nobody in the mobiles at the time but it came pretty close to them being washed away altogether,” he said.