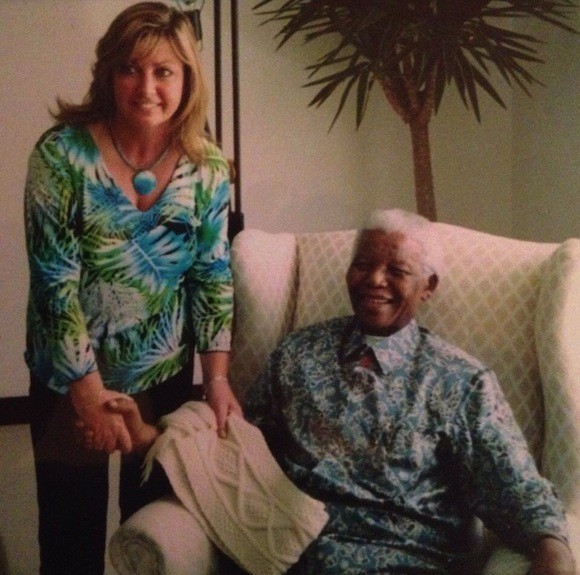 THE DAY NELSON MANDELA GOT A SCARF KNITTED IN DONEGAL

THIS was the day Nelson Mandela got an Aran scarf – knitted in Co Donegal.

The picture was Tweeted tonight by RTE sports journalist Des Cahill and shows his wife Caroline handing over the scarf.

It was knitted in Ballyshannon by Eileen Curran.

Mr Mandela passed away last night surrounded by close family and friends. He was 95.

His State funeral will take place in eight days.

Hours after his death a black SUV-type vehicle containing Mandela’s coffin, draped in South Africa’s flag, pulled away from Mandela’s home after midnight, escorted by military motorcycle outriders, to take the body to a military morgue in Pretoria.

President Zuma ordered all flags to fly at half –staff until Mandela is laid to rest at his ancestral village of Qunu in the Eastern Cape on Dec. 15.

This Sunday marks a national day of prayer and reflection, and a memorial service is to be held on Tuesday at Johannesburg’s Soccer City stadium.

Mandela’s body will then lie in state in Pretoria for three days.