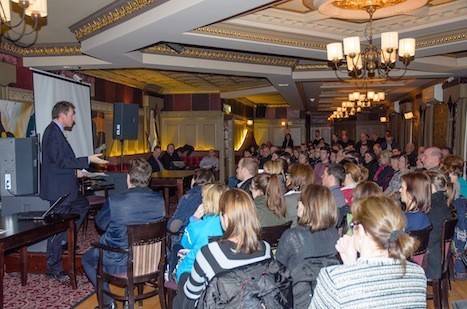 More than 200 people turned up for the meeting.

Around 200 parents, teachers and members of the community have attended a public meeting in Carndonagh to voice their concerns about severe cuts to small schools and the growing threat of forced amalgamations.

Father John Joe Duffy and Reverend John Deane, who have both campaigned against cuts to small and minority faith schools in Donegal, also spoke at the meeting.

Deputy McConalogue told the meeting that that as a result of cuts introduced by the Minister for Education Ruairí Quinn, schools with 1,2,3 and 4 teachers are being subjected to phased increases in their Pupil Teacher Ratio (PTR) over a two year period. This means that all schools with 86 pupils will have less staff, bigger classes and less funding.

“Many of our local schools have been crippled by cuts to resources. The abolition of the Summer Works Scheme and the Minor Works Grant over the past two years has made a bad situation worse. On top of that, schools with less than 86 pupils are facing additional cuts to resources as Minister Quinn targets their Pupil Teacher Ratio ,” said Deputy McConalogue.

“It is very clear to me that the Government’s real aim here is to force some of our local schools to amalgamate. It means that some communities here in Inishowen and across Co Donegal will ultimately lose their local school. This is completely unacceptable. It’s a highly damaging and discriminatory policy by a Dublin based Minister who has no clue of the importance of the local school to a community,” the Inishowen based Deputy said.

Teachers and parents also expressed their anger at the cuts to funding that have left many local schools in serious debt. They said that the loss of the Minor Works Grant and Summer Works Scheme over a two year period left a major hole in school finances and it was being left up to parents to plug the gap and raise much needed funds.

“The Government’s lack of commitment to supporting local schools is appalling. We are only talking about the basic funds required to keep a school open. Although the Minister has reinstated the Minor Works and Summer Works grants this year, this is only on a once-off basis and the funding remains extremely low. We need a commitment from him that these two vital grants will be reinstated permanently,” said Deputy McConalogue.

“We also need clarity from the Minister about the future of our local schools. The very existence of minority faith schools in Co Donegal is under threat due to Minister Quinn’s cuts. And all Donegal schools with less than 50 pupils could face closure. I am urging Minister Quinn to reverse his targeted cuts to the Pupil Teacher Ratio in smaller schools, to publish the Value for Money Review, and to come clean on his plans in relation to our small schools,” the local Deputy said.