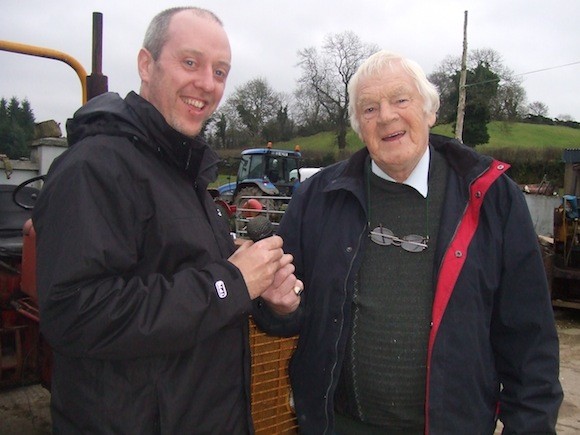 What have a tie signed by the late Joe Dolan, a gold disc signed by Margo and a microphone owned by Big Tom all got in common?

The answer is that they are all up for grabs at a rather unique auction taking place in Donegal just after Christmas.

To date the P.F.A has raised an astonishing €164,909.00 for the local Hospice homecare and Cancer Research.

This year we organisers will split the proceeds between the Hospice homecare and two local organisations – the Woodhill Resource Centre and the Ardara community childcare centre.

Once again Big Tom is supporting our efforts by graciously donating a valuable farming appliance his “Grape” which he has signed, a 25 year old microphone which he has sung many a tune on stage with, down through his long career and finally a signed €50 note to the P.F.A.

This is the second year Big Tom has supported the P.F.A. Last year he kindly donated for auction signed merchandise, a bag of spuds from his farm which sold for an amazing €110.

Margo the Queen of Irish Country Music took time out of her celebrations to mark her 50th year in Irish country Show Business next year 2014.

The committee is delighted to announce that she too supports the P.F.A and generously donated a Golden Disc (which she removed from her wall) which acknowledges her outstanding contribution to Irish Country Music.

This she signed for us to auction on the 29th December @ the P.F.A charity auction, along with her signed new CD and booklet.

In addition to these prized items from the King & Queen of Irish Country Music, we will be as usual, hosting the Livestock Auction.

Furniture and fixtures are removed and replaced with bales of hay to sit on with saw-dust covering the floors. The stage is also transformed into a bidding table for the auctioneer taking charge of proceedings over the usual dance floor which also morphs, on the night, into ‘the mart ring’.

In the past, lots have included sheep, heifers, bags of turf, chickens, gates, bags of nuts and bales of silage to name but a few.

“We’ve lots flying in as we speak. And we’re expecting a wide and varied range of items to be in place by the time the night comes around. If you’ve never been to the event, then you should make the effort this year as it’s truly a unique night that will live long in your memory – it’s crazy – but it’s all for such a great cause!”