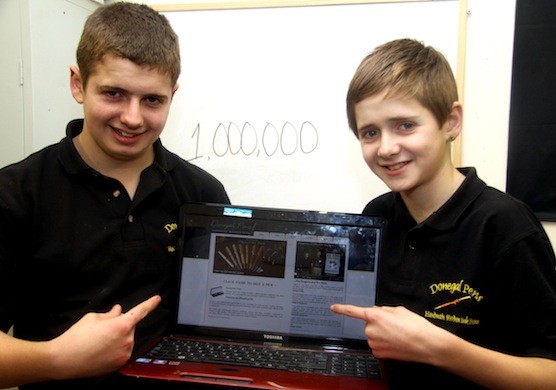 Donegal Pens schoolboys Ronan and Conor Mc Garvey of Loughanure are celebrating their first million this week but canít cash it in just yet!

Their website www.donegalpens.com has just recorded in excess of one million page views in just under one year. Statistics from January 1st this year to last Friday, December 13th show that the boys have had in excess of 1,060,000 page views on their site.

Ronan, 16, and Conor, 13, have been enjoying a great following since their appearance on Dragonís Den in May of this year where they emerged from the Den with a total of €4,000, the most from the twenty juniors who participated.

Donegal businesswoman and the only female dragon, Ramona Nicholas of the Cara Pharmacy group awarded them a €2,000 bursary, while Derry businessman Peter Casey placed a €2,000 order with them on the show.

Despite no assistance from state agencies, the boys have gone from strength to strength to build themselves a successful business run from a workshop in their back garden.

Their enquiry about funding from the Donegal Enterprise Board was declined because they were told they are “too young”.

In January 2012 the boys received a gift of a new workshop and equipment from the Expert Harwdare chain of stores to the tune of €4,500 when the company heard that state agencies failed to support their enterprise.

This week the boys were over the moon when their website designer John Michael Sweeney told them they had exceeded one million page views.

Neighbour John Michael keeps the technical side of their site in order and ensures the visitors from all over the world can get their hands on the Donegal made pens.

Speaking at the weekend the boys said they are over the moon to hear that their site has clocked up over one million page views.

“We hadnít been keeping an eye on that side of things and when John Michael told us we had clocked over a million page views we thought he was joking. The site has been busy particularly since Dragons Den and in the lead up to Christmas but we never thought it was that busy,” said Conor.

Ronan said when he heard rumours of the first million he was hoping it was time to go and meet the bank manager.

“Unfortunately we can’t cash the ‘hits’ in for Euros but we are just delighted that the site is proving so popular. Looking over the statistics now nearly half a million was clocked up in and around the Dragons Den appearance time. We had 427,000 page views in May alone so that is surely a reason for any young budding entrepreneurs to apply for Junior Dragons Den. It’s advertising that you couldnít pay for even if your pitch is not successful,” he said.

The boys are currently “flat out” dealing with Christmas orders and shipping pens worldwide. Orders for delivery within Ireland for the Christmas season are recommended to be with them by December 18th at the latest as delivery can’t be guaranteed after that.

“We will continue to ship until Monday 23rd but canít give any guarantees at that stage. Then itís shut down for the Christmas holidays and time to put the feet up and see what weíll do with that million,’ joked Conor.

In the new year the boys are planning on expanding the business by investing in a system that will allow them to laser engrave names and logos on the wooden part of the pens. At present they are outsourcing this work to another Irish company.

“It’s an expensive piece of equipment but we are hoping to travel to the UK in January to check it out as we are getting a lot of corporate enquiries about logo engraving on the pens,’ said Ronan.

Donegal Pens are available on their website www.donegalpens.com and at various retail outlets throughout Donegal and Ireland.