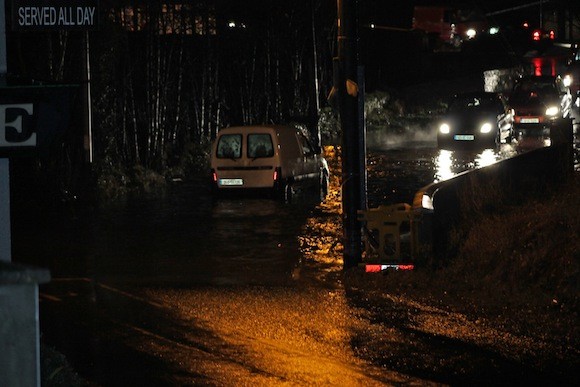 DONEGAL WAKES UP AFTER STORM WREAKS HAVOC ACROSS COUNTY

Donegal is wakening up this morning after a night of severe storms which caused major damage across the county. 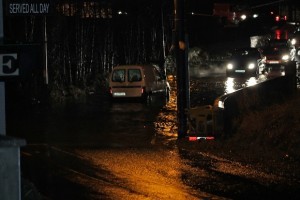 Nobody was hurt but there was extensive flooding, trees were ripped up, tiles were ripped off roofs and some structural damage was caused to buildings.

At one stage more than 12,000 homes across the county were plunged into darkness due to power outages.

ESB restored power to 5,000 homes – and will reconnect the remaining 7,200 homes before lunchtime today with Creeslough the worst affected area.

One driver cheated serious injury when a large tree fell across the bonnet of his car on the Milford to Kilmacrennan Road.

Donal O’Searcaigh had a lucky escape in another incident at the Blue Banks, Kilmacrennan.

“A tree fell in front of me, about fifteen to twenty feet in front of the car. I took evasive action but still hit it and went over it,” he said.

“It caused damage to the car, but I was lucky.”

There were reports of mobile homes being blown away in Bundoran while large stretches of road in Fanad and Manor were flooded.

One of the highest wind speeds was recorded on Aranmore Island which hit more than 130kph.

The flight from Dublin to Carrickfin Airport had to turn back because of dangerous landing conditions.

Many charity events across the county were cancelled as people were advised not to travel unless it was necessary.

And with more strong winds and even snow forecast for later today, it appears that the mild weather of recent weeks is well and truly gone.

There is ice on many roads this morning – motorists should drive with care.

There have been some passing snow showers too – but it has melted at lower levels.