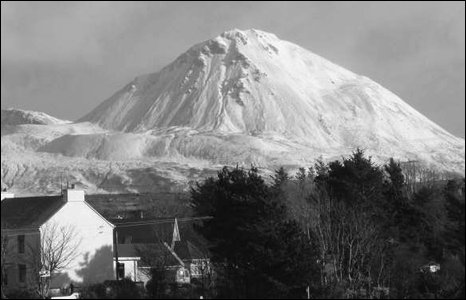 DONEGAL will see snow this Christmas, according to forecasters.

Forecasters say we will get some snow on the hills today and some more on Christmas Eve.

And some of them say we will get snow on Christmas Day – and that could prove amateur weatherman and postman Michael Gallagher correct!

Michael, who studies nature to predict the weather, had been dismissed as a crank by RTE forecaster Evelyn Cusack in a number of broadcasts.

But whether or not his methods are correct, forecasters from Met Eireann, the BBC and the UK Met Office and online sites are all pointing to a windy – and snowy – Christmas for Donegal this year.

Geoff Maskell from the BBC said gales will lash the North West over the next few days, with a storm expected on Monday.

He said there will be snow on Sunday morning – and again on Sunday evening.

And there will be more snow on Tuesday, Christmas Eve, with a chance of some snow in the North West on Christmas Day.

However most of it will fall on higher ground.

Very disturbed weather through the next week with some extremely windy or stormy periods likely
Cold on Saturday evening and overnight with further showers, mostly in southwestern, western and northern counties, some turning wintry in places overnight.
Sharp frost developing with icy stretches on untreated surfaces and overnight lows of around zero.
Sunday will be very cold with blustery westerly winds and occasional wintry showers. Falls of sleet and snow are likely – especially in the west and north of the country. Cold and frosty for a time Sunday night, but temperatures rising overnight as more heavy rain and strong winds spread countrywide by Monday morning.
Monday: Potentially stormy on Monday and into Monday night, as heavy rain and gale force southerly winds give way to colder showery conditions with gale force southwest winds with severe squalls, which may cause some structural damage in places.
Cold, very windy and showery on Christmas Eve, some showers possibly wintry on higher ground of the northwest. Afternoon highs of 5 to 7 degrees.
Cold and frosty overnight.
Latest indications suggest a frosty start to Christmas morning. The day is expected to be cold and bright day with some showers especially in the south and west with another milder, wet and extremely windy or stormy period expected on St Stephen’s day.

MICKEY THE POSTMAN MIGHT BE RIGHT AS SNOW COULD BE ON WAY FOR CHRISTMAS was last modified: December 20th, 2013 by John2
FacebookTweetLinkedInPrint
Tags:
Donegal Dailysnowweather