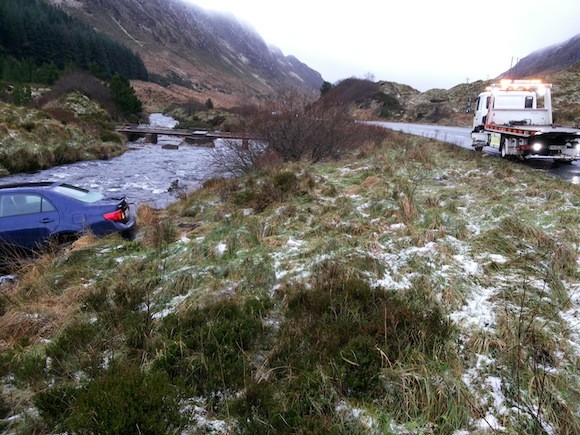 Donegal Recovery Services at the scene of today’s crash – DONEGALDAILY.COM

A MOTORIST was able to walk away from his car after it plunged into a river in Co Donegal today.

The driver was unhurt when his vehicle left the road on the Barnesmore Gap between Donegal Town and Ballybofey.

Gardai and emergency services were quickly at the scene.

The motorist was able to walk away from the incident.

It’s understood his vehicle skidded off the road in poor conditions.

The accident happened as snow and sleet in many areas of Co Donegal left main routes and secondary roads in a very poor state.

“We are urging all motorists to drive with extreme caution over the next few days after a number of weather warnings have been issued,” said a Garda spokesman.

Another severe storm will hit Donegal tomorrow evening and into Tuesday.