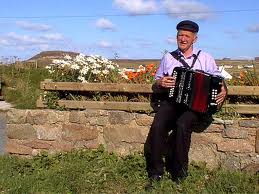 The King of Tory Patsy Dan Rodgers played the Waves of Tory as Santa left, he says

He flew off with his reindeers from Tory Island shortly after 6am, arriving in New York at midnight (local time).

He’s expected to finish his ‘run’ in Hawaii in a few hours time before heading home.

The National Statistics Office (Donegal branch) based in Lifford said a short time ago that Santa had dropped off a record 2,734,119 presents to 161,123 people in a new record time.

The King of Tory told us a short time ago: “Aye, he’s left.”