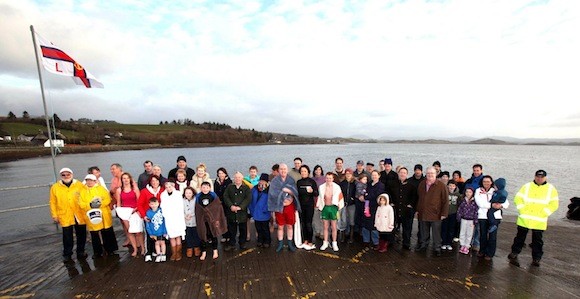 “The event has become very popular and even if you don’t want to take the plunge, we’d be delighted to see you. It’s mighty craic and we’ll have hot punch for afters. But more importantly, it raises much needed funds for the three Donegal based Lifeboat Stations at Bundoran, Arranmore and Lough Swilly ( Buncrana) who between them alone saved 68 lives in 2012.”

There are 56 Lifeboats around the island of Ireland and 95% of all RNLI activity is voluntary. The RNLI is an All Ireland and UK organisation founded in 1824. In 1922, the newly formed Irish State Government specifically asked the RNLI to remain in Ireland and continue its’ good work”. 189 years the RNLI is still here and look forwarded to saving more lives in 2014. The RNLI saved 1,041 lives around Ireland in 2012.

John Darch , Chairman of the Donegal Town RNLI told DD ” The RNLI continues to enjoy extraordinary support from the public in general. Our 56 Lifeboats are crewed by 3,000 voluntary people who often out their own lives on the line to save others. Nationally our boats were launched 939 times in 2012 saving 1041 lives. That’s a lot of happy families this Christmas.”