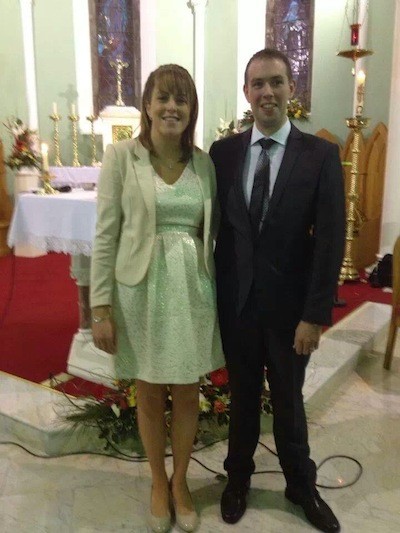 DONEGAL WOMAN CHRISTENS TWINS AND THEN SAYS ‘I DO’!

Karen with new husband Geroid after their whirlwind day!

It wasn’t quite ‘Four weddings and a funeral’ but Donegal woman Karen Simmons and new husband Geroid Dunne certainly know how to pack a lot into one day.

With three children under the age of two years, the devoted young couple didn’t know when they would find the time to walk down the aisle.

So when they were having their two month old twins Leah and Conor christened, they decided now was as good a time as any.

But even more surprising was the fact that none of their family or friends knew about their big announcement.

Karen, an office administrator from Listillion outside Letterkenny, said the only other person in on their secret was the priest Fr Martin Jennings.

“We decided that the vast majority of people we would want at our wedding including our families and close friends were there anyway.

“We didn’t want to put them to any additional expense or fuss so we decided we would have our wedding ceremony after the christening,” revealed Karen.

The mum of three, who now lives in Tubbercurry, Co Sligo with Geroid, two year old daughter Grace and new twins, said the reaction of the 50 or so friends and family was priceless.

“Fr Jennings was in on the secret and he knew we were getting married for the right reasons.

“When he announced after the christenings that there was another small ceremony – our wedding – people went very quiet. I think they were in shock. But then everyone cheered and it was just perfect,” said Karen, 34.

The couple had booked a photographer for the christening and so were able to get some wedding photos also.

The christening and wedding guests then had a meal to round off what was a wonderful if not somewhat surprising day.

The couple first met four years ago in Calgary, Canada where both were working and playing for the Calgary Chieftains GAA Club.

They moved back to Ireland but never found the time to tie the knot.

“We were both lucky in that we found work and although we had travelled a lot, we are delighted to have moved back to Ireland,” said Karen.

She said the only disappointment was that some family members could not make their wedding ceremony but the couple plan to have a big party and make sure everyone is invited.

“My brother was one person who couldn’t make the christening because he was sick but we couldn’t stop the wedding ceremony.

“We’re going to have a big party and everyone will be invited,” added Karen.

Karen is the daughter of Joe and Anne Simmons from Stranorlar.