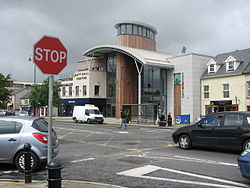 The Balor: arts groups and community organisations could have funding chopped, claims councillor

COMMUNITY groups across County Donegal which rely on funding from Donegal County Council may not get it this year if the council defaults on its budget next Monday, it has been claimed.

Every year each electoral area has a special fund set aside to assist community groups and arts bodies.

Fianna Fail, Sinn Fein and independent councillor John Campbell opposed the 2014 budget earlier this week in protest over Government austerity measures and in particular the transfer of water assets to Irish Water.

They return to County House in Lifford next Monday to vote again on the issue.

“What we do with the budget is still in our hands,” he said.

“My greatest fear is that if the council does default and the council collapses the decisions on how the budget is spent in 2014 will fall to Phil Hogan and administrators appointed in Dublin.

“So many projects across Donegal rely on council funding and there is no guarantee whatsoever that this will continue. It will be out of our hands. Funding could be stopped, or halved or quartered. We don’t know.

“Groups like the Balor Theatre or the CPI initiative in Castlefin are the sort of organisations which will lose out unless councillors pass a budget next week. That’s the truth of the matter and Fianna Fail and Sinn Fein know it.”