DONEGAL ATHLETE OFF TO MISSISSIPPI ON SCHOLARSHIP

Dempsey Mc Guigan the 20 year old Finn Valley athlete is off to the Univ Of Mississippi tomorrow Monday to begin an athletics scholarship at the Southern American academic institute. 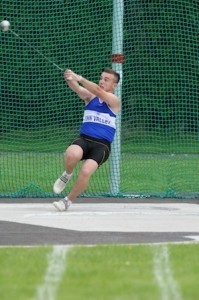 He is clearly looking forward to the challenge and continuing to progress his career as an interrnational hammer thrower .

His personal best of 63.60m from Watford in June 2013 in the event is the Donegal and Finn Valley record and for this young man from an athletic family.

His brother Fellan travelled to represent Ireland in the hammer at the world youth champs in Ukraine in 2013 while his brother Dalton is a national steeple age group champion and Mum Kate and sister Ashlee are runners .

Dempsey has represented Ireland at under 20 and at the world youth olympics all a reward for a life dedicated to improvement .

Dempsey will be amongst a group of Finn Valley athletes based in U S . Pauric Mc Laughlin and Sarah Collins currently on scholarship there. Tori Pena the olympian and the Irish record holder at pole vault currently about to open her 2014 season before heading to Australia to compete .

Best wishes are extended to Dempsey and no doubt we will be updated as he initially settles in and begins to compete and of course study .