GREAT SIGNS FROM DONEGAL AFTER VICTORY OVER ARMAGH 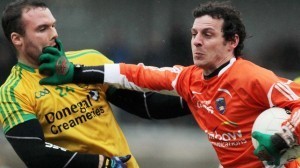 ARMAGH 0-11, DONEGAL 1-10 BY CATHAL MacSUIBHNE in Armagh: A first McKenna Cup win against inter county opposition for Jim McGuinness today at the Athletic Grounds in Armagh and with it Donegal have given themselves a chance of semi-final spot. That’s largely irrelevant as regards the actual competition but an extra game or two would do his charges no harm at all.

There are still plenty of cobwebs to blow off before the National League commences and for large parts of this game Armagh had control and looked to be well on their way to victory. The introduction of Neil Gallagher in the second half proved decisive; prior to that the home side were dominating the exchanges around the middle but the Glenswilly man’s presence swung the pendulum the way of the green and gold.

Donegal had the better of the first quarter and were two points to the good despite playing into a swirling wind that made shooting very difficult. It seemed to take Armagh a while to realise how best to use the wind to their advantage but once they did they had their best spell of the game, registering four unanswered points; many of them efforts from distance carried over by the breeze.

The Orchard men were intent on not letting Donegal dictate the pace of the game. Paul Grimley encouraged his team to take all restarts as quickly as they good – in one case net-minder Philip McEvoy had taken a short kick out taken before the umpire had barely got his hands on his flag to signal a point for Michael Murphy.

Murphy was marked today by Charlie Vernon, a vastly experienced player but more noted for his midfield endeavours. Michael was brought out to centre forward early in the game and it would have been interesting to see how Vernon would have coped on the edge of the square as a relative rookie in the full-back spot. Instead he saw more of the ball in following Murphy out the field and this probably suited him and his teammates.

While Vernon and Armagh saw plenty possession in the first half they were rather ponderous with the ball and didn’t appear to have a definitive way to break down the Donegal defensive screen – only when they began to use the wind to good effect did the scoreboard begin to tick in their direction.

Buncrana youngster Darach O’Connor again made the starting fifteen and opened his Donegal account as well with the game’s first score. Even in the wet and heavy conditions his pace and power was evident but it will be on a drier sod and with a quicker tempo that he’ll really come into his own. Just as he did against Tyrone last week, he began to cramp up towards the end of today’s proceedings and its just goes to show the massive step up there is from minor to senior – O’Connor was replaced by fellow newcomer Stephen McLaughlin for the last few minutes.

Pace is the key differentiator in the modern game and because O’Connor possesses that he has every chance of making it at the top level. Other speed merchants such as today’s centurion Frank McGlynn, Karl Lacey and Leon Thompson (who was introduced at the break) can find it hard to discover their best form at this time of year but when Summer comes they eat up the yards.

The kick-out strategy on display last week wasn’t used as much today; the movement around the middle third was still taking place but things were much more crowded in that sector than they were in O’Donnell Park. Michael Boyle was between the sticks and he incurred the wrath of the home support on numerous occasions when taking his restarts. On placing the ball he’d pause to wait for a signal or a run from one of his midfielders or half forwards as to where the kick should go; this took up to a few seconds each time and the crowd were getting restless but again its all part of the work that is going on with the kick outs at training.

Armagh were much smarter with the ball after the short whistle; knowing that scoring from distance wasn’t an option against the wind they instead executed short kick passes to their inside forwards who took on their men at every opportunity and were rewarded with a couple of easy scores early in the second half; Robbie Tasker and Niall McConville were both particularly impressive with ball in hand.

It was here that Donegal really missed Paddy McGrath. While Eamon McGee, Frank McGlynn and today Declan Walsh all have experience of playing corner-back, McGrath is the only specialist in this position in the panel. The Ardara man has resumed training following his groin surgery and the sooner we see him back the better.

Of course Karl Lacey has two All-Stars as a corner back but those days seem to behind him; today he was stationed at wing back and it was encouraging to see him in action after so many different injury problems over the past year.

Armagh held their lead for most of the second half but when Colm McFadden netted after a goal mouth scramble the visitors sensed an opportunity. It was Murphy and Odhran MacNiallais who stood up to be counted in the closing stretch; the Gaoth Dobhair man produced a massive last ten minutes to get his side over the line. First he cleanly fetched a McEvoy kick-out and immediately off-loaded to his captain who split the posts from 40 yards.

Murphy then scored a wonderful free soon after to put his team one point to the good – the effort was from the ground on the far touchline on the 21-yard line and it sailed over the black spot. MacNiallais would have the final word as he registered Donegal’s final two points to cap an excellent individual performance and put the seal on a two point win for McGuinness’men.

While it was good to get the win, the positives were in the chances given to players such as Thompson, Gallagher and David Walsh, the Naomh Brid clubman making a real difference when introduced; they all need game time as they work their way back from injuries or in Thompson’s case, get used to the rigours of inter county football again. MacNiallais and O’Connor got another game under their belts while we will likely see more from Malin’s McLaughlin in the coming weeks.

The final Section A fixtures take place this coming Wednesday and Donegal are well positioned for a crack at the last four. It might well be a night for the calculators with score difference likely to be the deciding factor; as it stands now Donegal could conceivably finish anywhere from 1st to 4th in the group.