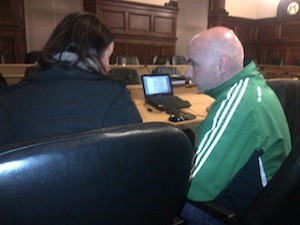 That left the votes tied at 14 each.

Mayor Ian McGarvey had the casting vote – he could vote twice – and that gave the budget the passing vote it needed.

No-one has as yet explained where Cllr Donaghey was for the vote.

There have been some dramatic scenes all day in the council with rows over adjournments – and even whether the councillors should have tea.

Fianna Fail and Sinn Fein had wanted the budget to go unpassed in protest at cutbacks.

It was a dramatic late twist to a bizarre day in the council.