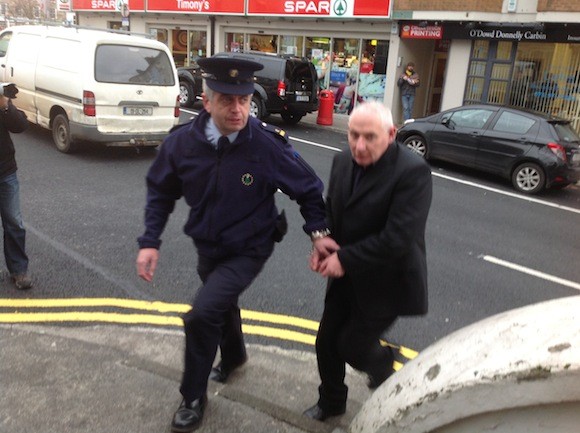 Michael Ferry, right, being taken into court in Donegal Town in December.

Over two years on from the conviction of Gaoth Dobhair paedophile Michael Ferry TG4 last night broadcast a programme about the affair.

Ferry committed sickening attacks on young boys in the parish over a 20 year period, some of those attacks continuing after his 2002 conviction for similar offences.

Most of the attacks took place at the Ardscoil Mhuire premises in Derrybeg where Coláiste Cholmcille ran courses for Irish language students.

But last night’s TG4 programme, whilst reminding us all of the horrific story, failed to deliver any new material.

In fact the documentary’s entire focus was on the unanswered questions on the affair, and it failed to answer any of them.

It was a real shame as witnesses who saw Ferry driving a school bus in Dunlewey as late as 2006 – with children on board – were never interviewed for this programme.

It was very much an historical documentary, rather than an investigative one.

Questions which do need answered will only come once the DPP takes a decision on whether any new prosecutions are warranted; then we will have either another court case, or the release of a HSE report into the affair.

Whatever the conclusion, it has taken far too long for this horrific affair to have an ending.