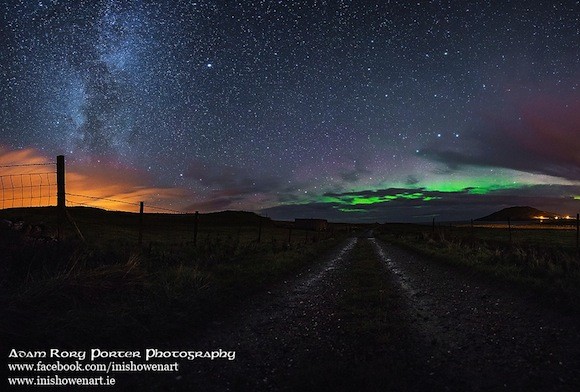 Sky-gazers were left disappointed after traveling from across Ireland to see the spectacular Northern Lights above Donegal at the weekend.

An alert was put out that the aurora borealis or Northern Lights would be visible in the skies over Donegal and the North-West.

The amazing dancing lights, normally only seen around the Arctic Circle, were expected to move further south between Thursday and Saturday.

NASA and Astronomy Ireland were among groups and organisations who alerted the pubic to the natural phenomenon.

Hundreds of people travelled from across Ireland including Dublin and Roscommon to catch a glimpse of the lights.

But they were left hugely disappointed when the lights failed to materialise.

The lights went dim when ejections from the sun slowed down and the earth’s magnetic field pulled all the light Northwards back towards the Arctic Circle.

One disappointed light-hunter travelling around Malin Head in Co Donegal tweeted “The only lights I can see are the headlights of other cars looking for the Northern Lights.”

“It is not an exact science and even people in NASA were quite confident of a good lights display in more southern skies.

“I met a lot of people who had traveled from down south hoping to sees the lights but it was just not meant to be.

“I felt so guilty because I had been reading these forecasts from NASA and it looked like there was a good chance of seeing the lights but the ejections from the sun just slowed down.

“The reality is that if you want to be almost guaranteed to see the Northern Lights then you have to travel to Iceland or Norway and that’s quite expensive.

“It took me five or six warnings to see the lights myself but it was certainly worth waiting for,” he said.

The aurora borealis occurs when highly charged electrons from the solar wind interact with elements in the Earth’s atmosphere leaving amazing light shows of various colours.