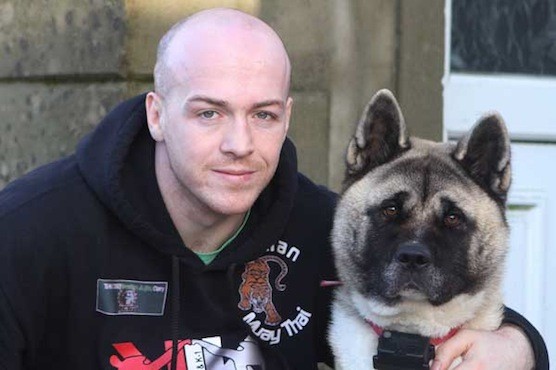 KICK-BOXER TOMMY REVEALS DOG WAS DRUGGED AFTER BEING STOLEN

Dognappers left back a stolen pet after they realised its owner was a champion kick-boxer.

Tommy McCafferty from Burt was distraught when his rare American Akita dog Saoirse went missing from his garden.

The well-known sportsman, known as The Ghost, went searching for the dog which he has had for three years.

“I searched everywhere but there was no sign of her. I contacted the Gardai and friends and also started a Facebook campaign,” said Tommy, 28.

Tommy, a two times world professional and Commonwealth champion, went to bed that night but there was still no sign of Saoirse.

Amazingly the following day he got a call from his girlfriend to say the dog had been left back in their garage.

“She was so emotional when she called me that I thought something terrible was wrong.

“But we were just so delighted to get the dog back.

“What worries me most is that someone was on my property twice. If I had come across them I would be afraid of what would have happened,” said Tommy.

He revealed the dog’s pet care collar had been taken off and there were signs she had been drugged.

“She was very groggy and still won’t go outside because she is so frightened after what she went through.

“I’m one of the lucky ones. Thousands of people every year have their dogs lifted and never see them again.”

Ryan McCauley of Donegal Pet Recue, who helped Tommy search for his dog, said there has been a spike in dog thefts in recent weeks.

Ryan feels the dogs of all breeds are being used as bait for dog fighting.

“It started in November and there has now been a huge spike.

“The problem is that all types of breeds are being taken and we fear that dogs are being used for dog baiting.

“We are close to the border and they can easily be shipped into Northern Ireland and overseas.

“We would appeal to people take extra care of heir dogs and to microchip them,” he said.