A Mulroy College student has branched out into nature to help her receive a Science Foundation Ireland Award at BT young Scientist 2014. 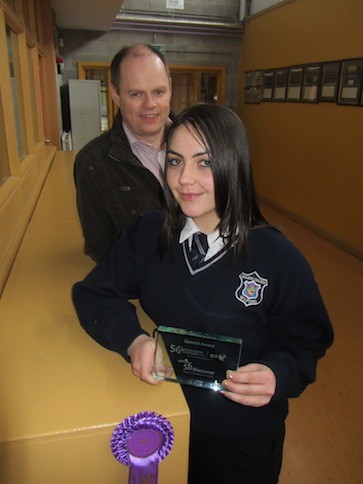 Chloe with teacher Declan Docherty and her award!

Fifth year student Chloe Bradley investigated the nutritive value of gorse and heather as a food source for mountain sheep.

Chloe took on this project last summer with a hands-on approach where she fed 27 sheep over a period of 5 weeks on gorse, heather and hay.

Through this project she wanted to investigate if this combination could be used as a food source for mountain sheep and her conclusions proved positive.

Her interest in this area comes from the fact that Chloe is from a farming background and helps her family run the suckler cow and sheep farm at home.

She is hoping to pursue a career in agriculture and has a great interest in becoming a vet.

Chloe represented Mulroy College in Milford and Principal Ms Fiona Temple stated: “We are very proud of Chloe. She put an enormous amount of work into this project. Her success is very well deserved and with the very high standard of projects at the BT young Scientist we are delighted for her that her hard work has paid off.

“I have no doubt that Chloe will receive many more successes in her career. A big thanks most also be given to Mr Declan Docherty the teacher who helped her with the project over the summer.”

“It was a great experience from start to finish and last Friday was the icing on the cake. I would encourage other students to get involved in this event as I gained so much from it.”