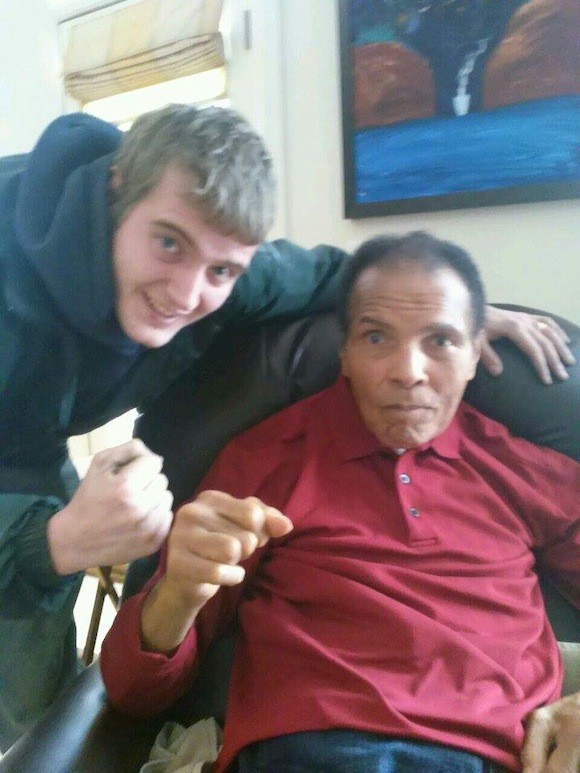 A DONEGAL man working in the same American street where Muhammad Ali lives was invited in to meet him – after knocking on his door.

The former world boxing champion and 20th century sporting icon was celebrating his 72nd birthday yesterday at his home in Louisville, Kentucky.

Greencastle man Tony Kelly just happened to be working in a house across the street when his workmates told him who the famous inhabitant of the other house was.

Half-convinced they were taking the hand out of him, he decided to check it out.

So Tony walked across the road, knocked the door and said told Muhammad’s wife Yolanda: “I’m one of his greatest Irish fans and I’d love to meet him.”

Ali – who has his own Irish ancestry – invited Tony in for a chat and a pic.

Tony, the son of Liam and Margaret Kelly in Greencastle moved to Louisville, Kentucky in November 2012 where he married his wife Megan.

He had met Megan when she was on trip to Ireland and working on the Local organic farm in Greencastle.

They now have a very handsome son sporting another famous name –  ”Luke Kelly”.

The family hope Luke can live up to the name and follow in his fathers footsteps who is a well known member of a local band ”Springtides” who where very successful in their time.

Hats off to Tony….

He’s working as a plumber over there….and with temperatures dropping, there has been plenty of work fixing broken pipes.