Sinn Fein in Donegal has called on Minister Joan Burton to view the Jobsbridge website which they have described as a “farce.” 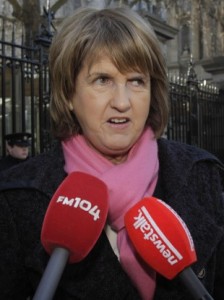 Local Sinn Féin Youth representative Lauren Walsh said the website provides a situation whereby so-called opportunities are being promoted by the Government under the guise of internships.

The West Donegal woman said “The Jobsbridge website offers nothing but dressed-up discrimination as a means by which vacancies can be cheaply filled at the expense of qualified and hardworking young people.”

“There are currently 49 positions advertised under the internship scheme in Donegal, including solicitors, office administrators and IT managers.”

She said it is clear that these are not designed as work experience opportunities but replacements for full time jobs.

“This Government is insulting young people by asking us to work for an extra €50 on top of a social welfare payment which has been slashed for under-25’s in the latest austerity budget. How do they expect young people to survive, never mind prosper in their own community?”

“I have watched many of my friends emigrate to Australia, England and Canada, because there is no meaningful way for them to make a decent living at home. Jobbridge is not the answer to this crisis. Real, meaningful jobs for young people are.”

Ms Walsh said quickly scrolling through the vacancies on offer under this scheme in Donegal, it is clear to anyone that the scheme is not fit for purpose.

“For example an advertisement for an Administrative Clerk position based in Bundoran offers the intern formal/informal training in the use of MS Excel & Spreadsheets among other things. However, in order to qualify for the internship a prospective intern must have completed an ECDL course, of which MS Excel and Spreadsheets are a central component. What is there to learn then? Where then is the 30 hours a week training going?

“Some employers are using the JobBridge scheme to avoid paying people to undertake the standard functions on which their business and profits depend. And the design of the scheme facilitates this outrageous exploitation.

“The JobsBridge scheme is a giant disincentive to job creation. Why would an employer create a real job when they can exploit cheap labour courtesy of the government? The young people of Donegal deserve better than this joke of a scheme. It is high time this Government put an end to the tokenist gestures and engaged in some real action to address youth unemployment.”