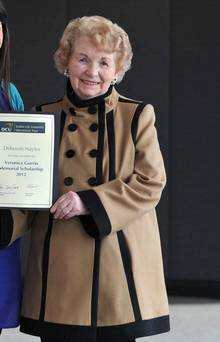 WARM tributes have been paid to Killybegs woman Bernie Guerin, the mother of murdered journalist Veronica Guerin, who was laid to rest yesterday.

Mrs Guerin’s daughter was shot dead by criminals in 1996.

Bernie was a native of Donegal and Killybegs and never forgot those roots.

After her daughter’s murder she campaigned for changes in the law and the Criminal Assets Bureau was established.

She also campaigned for the proceeds of criminal gangs to be used to help the victims of drugs.

Father Michael O’Grady told mourners at the Church of the Holy Family in Artane, Dublin that Bernie was a “wonderful Irish mother, the likes of whom we’ll indeed be very fortunate to see again”.

He added:: “I’m often reminded that sometimes we look for heroes in all the wrong places. Our heroes are often the ones who do the ordinary things extraordinarily well, the ones whose love makes us who and what we are. And Bernie was such a hero.”

Mrs Guerin was laid to rest at the cemetery in Sutton, Co Dublin.

She had been ill for some time and had passed away in Co Kerry.