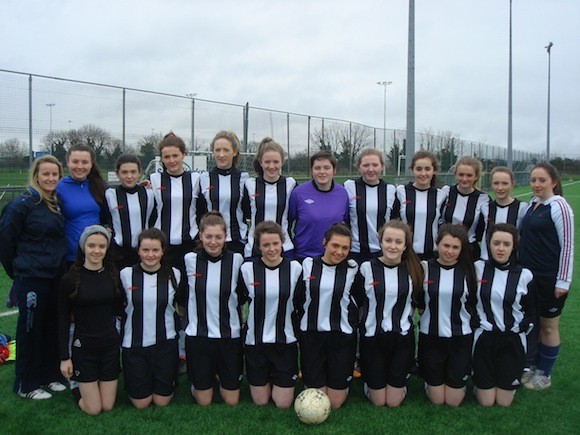 “Excitement and delight”, were the words of Mulroy College Principal Fiona Temple when she reported that Mulroy College Senior girls are in their second All Ireland soccer final in three years.

The team was victorious against Ramsgrange Community School from Wexford in the All Ireland semi final in The AUL complex in Dublin yesterday.

The final score was 2 v 1. Ramsgrange scored in the first minute before Mulroy had even settled into the game. This enticed the Mulroy College girls to lift their heads and show off their skills.

The midfield was far the superior with captain Aoife Mc Devitt showing determination and leadership in the centre of mid field supported by Mariosa Friel, Michelle Doherty and Lucy Marie O Flynn. Lucy Marie came close to scoring after 35 mins but unfortunately the ball fell to her wrong foot.

It was evident that Mulroy were destined to score with near misses from Michelle Doherty and Caoimhe Walsh. The strength of the defence with Orla Mc Gonigle , Rosheen Mc Ginley, Lianne Boyce and Zoe Greene ensured that Karla Mc Bride had a quite time in nets.

A great corner taken by Amanda Callaghan landed to the feet of Michelle Doherty, her long range attempt on goal just before half time went wide but left Mulroy closing the first half with positivity.

On the 55th min Lianne Boyce, from the 30 yard line struck a long range power shot that rattled the net and nearly went through it. This lifted the spirits and the excellent passes continued down the wing between Mariosa Friel, Aoife Mc Devitt and Zoe Greene. Greene was moved up front and was superb partnered with Caoimhe Walsh. Both girls winded their way through the Ramsgrange defence.

It was looking like extra time when Eimear Gibbons’ height made the difference to put Mulroy ahead with 2 mins remaining.

The Mulroy College team held out for a well deserved win and entry into the All Ireland final on the 5th Feb.

After the game team manager Pauline Ann Gavigan commented, ” I am delighted for them, the girls work so hard at training and this is reflected in the result today. They never stopped even when we went one down in the first minute. I’ll be hoping for a repeat of this in the final – no pressure girls’.”

Fiona Temple concluded by congratulating the team and management and commented that” the school has been very successful in soccer, gaelic, rugby and athletics this year so far, and I encourage all young people to get involved.”