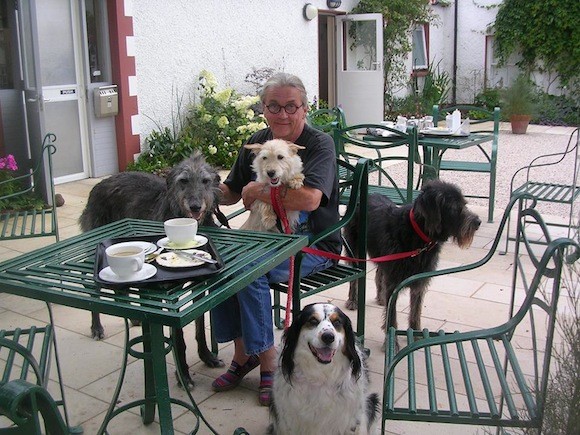 You could say that Sean has his hands full after 154 foster dogs!

Sean and Kate Standing’s home life has literally gone to the dogs.

The Churchill couple took in their first rescue dog just 18 months ago.

But since then the big-hearted dog-lovers have fostered a staggering 154 displaced dogs.

Putting the dogs to sleep is simply not an option for Sean and Kate. 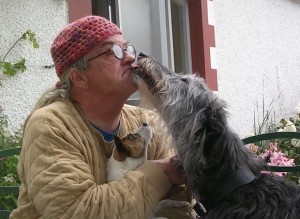 Sean gets plenty of affection from his dogs.

They have even been forced to build kennels at their home to cope with the growing numbers.

“We just love dogs of all kinds and we’re just happy to be able to help.

“We obviously didn’t think we would foster so many dogs but the need is obviously there,” said Sean.

The couple operate a strict adoption policy which includes a home visit by Donegal Pet Rescue to see if a family suits the needs of the dog.

The dogs will also be micro-chipped and have their vaccinations before being handed over to their new owners.

Sean and Kate have built kennels to look after their foster dogs.

Despite the huge number of dogs passing through their hands, the Standings have only adopted one dog.

Finn, a Scottish Deerhound, has become part of the family.

He even has his own Facebook pages which documents his trials and tribulations everyday.

“He was in such a poor state when we got him and he came on so much that we simply couldn’t part with him,” said Sean.

Ryan McCauley of Donegal Pet Rescue says they would simply not be able to operate without the help of people like Sean and Kate.

“We have a number of people who foster but Sean and Kate are very special.

“They have saved so many dogs and they really go out of their way to help the dogs and to look after them.

“We would be lost without them,” he said.