DONEGAL FAVOURITE ‘PORTAVENTURA’ WILL SURPRISE MANY THIS SEASON WITH NEW ATTRACTION

It’s the Disneyland of Spain and has long been a favourite stopping-off point for Donegal families holidaying there. 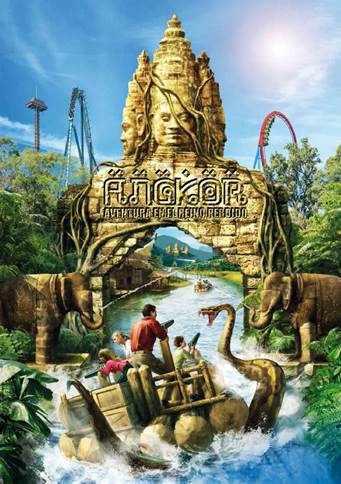 Now PortAventura will surprise this season’s visitors with a spectacular new attraction: Angkor: Adventure in the Lost Kingdom.

This novelty is framed in the context of the resort’s development strategy to become the best holiday destination for European families: a concept that can be defined as European Destination Resort.

This project enhances the company’s internationalisation strategy as well as being another step towards the investment commitment that has led PortAventura to spend more than 100 million euros in new projects and equipment since 2009.

The new attraction will open on April 11th to coincide with the start of the 2014 PortAventura season.

Inspired by the Asian jungles, the new chapter of the theme park will be a new water boat ride that will be unique in Europe because of its length (300 meters) as well as fantastic theme detail.

The new attraction will be located in the China area of the resort near Shambhala (Europe’s highest roller-coaster), and is based on the Cambodian temple of Angkor Wat, considered the world’s largest religious structure.

Declared a World Heritage Site in 1992, Angkor Wat means “city of temples” and experts believe that it was built between the ninth and fifteenth centuries. Legends and mysteries abound in the lush jungles and dangerous mangrove forests surrounding it, where our trip begins.

Visitors will board rafts equipped with water guns to take on the dangers they will face in the jungle ahead.

Their journey will take them through different areas full of surprises and interactive challenges: mysterious villages, snakes that rise from the river, tigers hidden in caves, monkeys that inhabit ruined temples and magnificent stone elephants. Passengers can shoot at them with their water jets, or even take aim at other boats and onlookers.

Angkor covers 10,500 m2, a huge space that is almost the equivalent of a complete theme area, and offers a journey time of about 10 minutes.

This makes it one of the longest boat ride attractions in Europe. It has been designed by MACK Rides, one of the world’s leading manufacturers of resort attractions and owner of Germany’s Europa Park. The ride will have 14 boats, each seating up to 8 people, and an hourly capacity of 726 people.

In keeping with the meticulous attention to atmospheric detail that characterizes PortAventura, Angkor: Adventure in the Lost Kingdom is an ambitious recreation of Cambodian temples and jungles, including Hindu and Buddhist references. The attraction offers families the opportunity to share an experience suitable for all ages, combining adventure and fun in a refreshing environment.

As well as Angkor, PortAventura will also offer another spectacular summer arrival: the world-famous Cirque du Soleil. Their latest presentation, KOOZA, is an incomparable adventure full of acrobatics and excitement, set in a fantastic realm. PortAventura is the first resort in Europe to host Cirque du Soleil and more than 2,400 visitors will enjoy the show each day.

These new additions consolidate PortAventura’s national and international reputation as one of the best family entertainment resorts in Europe.

They form part of the new investment plan recently announced by Investindustrial and KKR, which aims to boost the resort’s success with both domestic and foreign tourists. To this end, the resort has in recent years added new, unique attractions every year, such as the Shambhala roller-coaster, which holds three European records (for height, drop distance and speed), and the expansion of the Costa Caribe Aquatic Park with King Khajuna, the highest free fall water slide in Europe.

PortAventura with almost 4 million visitors, is a themed holiday resort on the Costa Dorada, south of Barcelona. It opened in 1995 as Spain’s first theme park, with the goal of offering a journey around the world in a single day. After meeting great initial success, and thanks to the opening of its hotels and Costa Caribe Aquatic Park, PortAventura has become an internationally renowned tourist destination in itself.

The Costa Caribe Aquatic Park, expanded and completely updated in 2013, is a key feature of PortAventura and the resort’s comprehensive facilities also include a 4,000-person capacity convention centre.

All of this, together with its excellent location on the Costa Dorada, its transport connections, its convenient closeness to Barcelona and Reus airports and the high-speed AVE train link, makes PortAventura one of the best European holiday destinations on the shores of the Mediterranean.