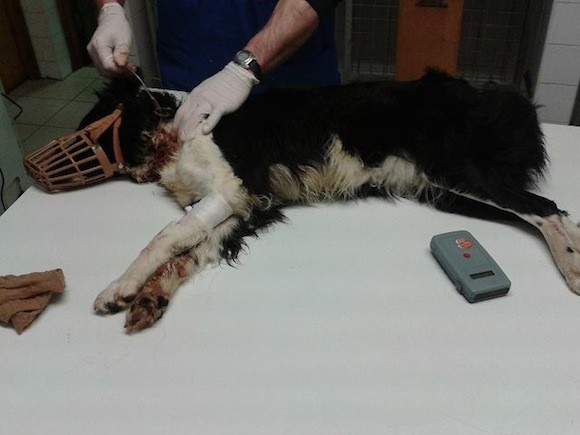 SICKENING – DOG FOUND WITH BULL WIRE EMBEDDED IN ITS NECK

The dog is tended to by vets after bull wire was found embedded in its neck.

An investigation has been launched after a collie dog was found with bull wire embedded in its neck.

Animal welfare officers believe the wire may have been used to keep the dog tied to a fence.

The dog was found by a member of the public close to a beach in the vicinity of Erraroey, Falcarragh.

The local dog warden initially responded to the call and ISPCA Inspector Kevin McGinley was called in to investigate.

The length of heavy duty fencing wire which was wrapped around the dog’s neck is believed to have been used to tether the animal. 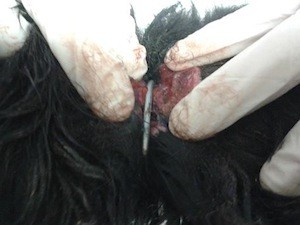 The wire which was embedded in the dog’s neck.

The wire had cut into the dog’s flesh leaving a deep open wound when found on Thursday last.

The female collie, who is aged approximately 2 to 3 years, is currently being treated in a local veterinary surgery.

When fit, she will be taken to the ISPCA’s National Animal Centre to complete her rehabilitation. “This is a very serious injury” commented Inspector McGinley, “but we are confident that she will make a full recovery.

“We would appeal for anybody who may have information as to the origin of this dog to contact the ISPCA on 1890 515 515”.