The ISPCA in Donegal has defended its handling of a case in which up to 30 dogs were taken from a man at an address in Lifford. 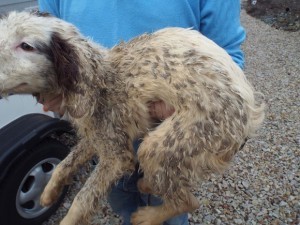 The dogs were found in a poor state.

It follows local criticism of the incident with locals claiming the man had been investigated before for similar incidents.

The dogs, most springer spaniels, were found in a poor state at the man’s premises.

However the ISPCA said they are satisfied that all the correct procedures were followed in the case.

A statement from the ISPCA said “The ISPCA considered all the facts in this case. It would not have been appropriate for the ISPCA to refer this matter to an Garda Siochana.

“None of the dogs were hungry, sick, injured, or had suffered physical abuse. Ill-health has caused failings in the correct management of the dogs which resulted in unrestricted breeding.

“It is the policy of the ISPCA to work with people who ask for help, particularly when there are extenuating circumstances in order to ensure the best outcome for both people and their animals.

“After careful assessment of the entire situation, including the owner’s current health status and the facilities at their disposal, it was agreed that a number of dogs could be retained. We will continue to monitor the situation and offer help and advice.”

“It appears that there was an explosion in the number of dogs in a relatively short period of time and the owners were unable to cope. Thankfully, they sought help before the situation deteriorated further”.

He said said the man now has five dogs that he is able to care for, but the ISPCA would carry out regular inspections “just to make sure standards are being kept up”.