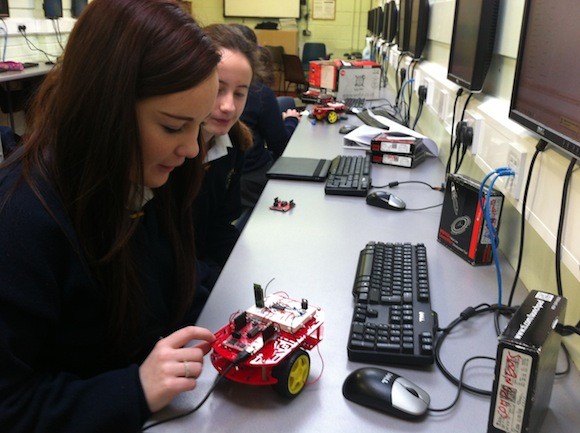 Encouraging young people to build and program their own robots has proved to be a big hit with school children in Donegal.

Martin Bradley, a lecturer in the electronic engineering department at Letterkenny Institute of Technology (LYIT), pioneered an after-school robotics programme to help encourage students to become inspired by engineering.

The Mobile Robot programme was first introduced in December 2011 at Crana College with Sean McFadden, an engineering teacher at the school. The programme taught young students how to program a light-following robot and older students how to build and program it.

“I felt if we could engage young students in engineering in a practical way it would make the subject enjoyable and accessible. Robots seemed to me to be an imaginative way to get the students’ attention,” explains Martin. He had previously introduced robot building and programming into the “Introduction to Electronic Engineering” module at LYIT. Major US Multinational Texas Instruments, whose microcontroller is the brain of the robot are very excited and have published an article about the programme “ The Luck of the Launchpad in Ireland” on their website.

What started out as a pilot sparked such huge interest amongst the students that Martin decided to expand it. The Mobile Robot Programme has been rolled out to 8 other schools and will be available to the general public in Inishowen this summer through a “Technology Club” which is to be set up in the new Sliabh Sneacht Centre in Drumfries.

Sean Deehan, a student at Crana College, says he got a lot from Mobile Robots, “I enjoyed learning about the chips in the robots. It’s interesting to see how this links to real life applications. It was brilliant making and controlling the robot.”

Liam Galbraith, Principal at Crana College, adds, “It was great to see students engrossed in something that obviously captivated them. This will benefit these students a great deal.”

The impact of the programme didn’t go unnoticed. In May 2013, Crana College received the Science, Technology, Education, Arts and Math (STEAM) Awards at the Donegal Vocational Education Committee awards ceremony. Last Year, four students from Crana College showcased their robots on the Institutes of Technology Ireland (IOTI) stand at the BT Young Scientist exhibition in Dublin.

“A synergy has resulted from this and I believe the impact on the local economy will be seen in the future. I’d like to thank all of the people who help run the Mobile Robot programme and the students who participate. They keep us on our toes.” Bradley said.

For more information on engineering courses at LYIT visit lyit.ie/courses or to find out about the The Mobile Robot programme contact Martin Bradley martin.bradley@lyit.ie