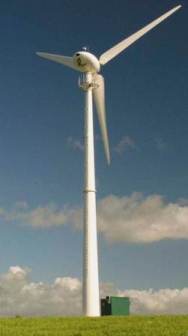 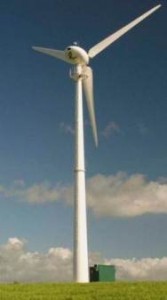 Local residents are angry that the developer of a wind farm in Co Donegal has applied to increase the height of the turbines to become one of the highest in the whole of Ireland – and the biggest in the county.

The Inishowen Wind Energy Awareness Group says it will oppose the plans near Kinnagoe Bay.

“In his application the developers says it is a ‘slight’ increase. We don’t call increasing the height of the hub from 69 metres to 85 metres ‘slight’,” said a spokesman for IWEAG.

“That is an increase of almost a quarter of the permitted height. It will be the height of a five story building. It takes the full turbine height to 132 metres. The highest turbine is in Greystones in Wicklow at 139 metres.

The developer is proposing to increase the height by 16 metres making them nearly forty metres higher than any building in Ireland. The highest building is St John’s Cathedral in Limerick at 93.8 metres.

“It would make the turbines almost twice the height of St Eunan’s Cathedral in Letterkenny,” said a local resident.

Part of the reason all this is making people angry, is that after the first application for the two turbine wind farm was turned down by Donegal County Council Planning Authority the developer appealed to An Bord Pleanala.

In the appeal process, Donegal Council was asked by An Bord Pleanala to comment on the appeal and again DCC turned it down on the same grounds: wrong place for a wind farm.

An Bord Pleanala’s inspector visited the site on Crockbrack Hill and also decided it was the wrong place for a wind farm.

As well as DCC Planning, the Inspector of An Bord Pleanala did not think, that if something is ‘open for consideration for wind farms’, it means it has to be done under any circumstances.

But the board of An Bord Pleanala decided to ignore their own inspector’s report and recommendations, ignore the recommendations of the DCC planning department and ignore the submissions made by local residents and granted the appeal.

In An Bord Pleanala’s Board Directions there is a set of 19 conditions for this development, which are to be complied with by the developer.

It is stated in condition no. 5:

“How can the developer now apply to increase the height? He has already successfully applied to have the road extended across the top of the hill and moved the substation to another location higher up on the hill,” said the group spokesman.

“Is it really possible, even though An Bord Pleanala agreed to one application with strict conditions, ( see An Board Pleanala, ref. No: 240394: Crockbrack Hill, Carrowbeg and Meenletterbale, Moville, Co.Donegal (12/70002)) that the developer can at a later date change everything in it. How can that be?”

“Our community is kept in the dark” says a local resident.

The developer advertised the 5 planning applications involved in this one development.

The first one was placed into the Irish Times and that’s why it slipped past the attention of the local community. (See article in the Donegal Daily, March 9, 2012 – INISHOWEN RESIDENTS SNUBBED BY PLANNING APPLICATION FOR WIND FARM.

Thousands of residents across Inishowen couldn’t object to a planning application for a wind farm – because they didn’t know about the application.

If people want to object to the latest application (14/50014) to increase the height above the limit placed on him by An Bord Pleanala they have until 14th February to write in an objection to the Council.

List of tallest structures in Ireland – Wikipedia, the free encyclopedia