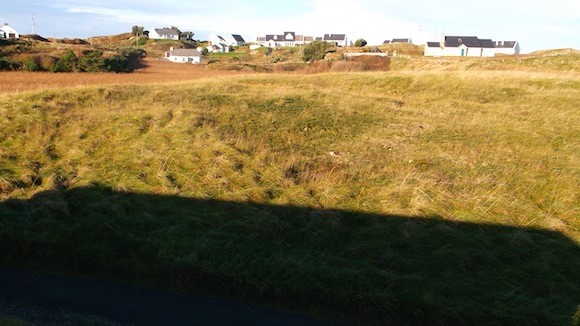 The site on Cruit Island where the ‘giant’ was found in 1954.

A team of research scientists are seeking permission to exhume the skeleton of what they believe was one of Ireland’s tallest men who is buried in Co Donegal.

The body of the man, who is measured at 7’8” tall, was discovered in in 1964 by council workers filling a road.

The body was interred at Cill Bhride cemetery on Cruit Island in 1954 but his identity and background still remains a mystery.

Now a team of research scientists say they would like permission to find out more about the Cruit Island Giant. 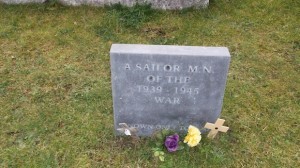 The grave at Cruit Island which locals believed has the wrong headstone and contains the 7’8″ man.

One of the team, Brendan Holland, says that judging by the man’s long hair, he could be anything up to 500 years old.

The Co Tyrone-based researcher first heard of the mystery man in an article by historian Andrew Sharkey in the local Rosses Annual.

He says to exhume the skeleton and to remove a tooth and some bone fragments would possibly uncover a significant amount of information about the mystery giant.

“I am guessing merely by his hair length that he could be that old. We simply can’t tell.

“But if we were to be give permission to exhume the skeleton and take some samples then we could get a lot more information.

“We could put an age on him and tell what his diet was like and such things. At the time Gardai measured him and he was 7’8”. That would put him in the tallest 2 to 3 per cent in the world,” he said.

The team, who are carrying out a general study of Pituitary Gigantism, are first looking for a copy of the original coroner Dr McGinley’s report into the death.

Brendan, who also has Pituitary Gigantism, has spoken with many local people including Breige Sweeney who was just ten years old when she came across the body.

The body was just eight inches below the surface and just 150 yards from the waterline which meant it could have been washed up. 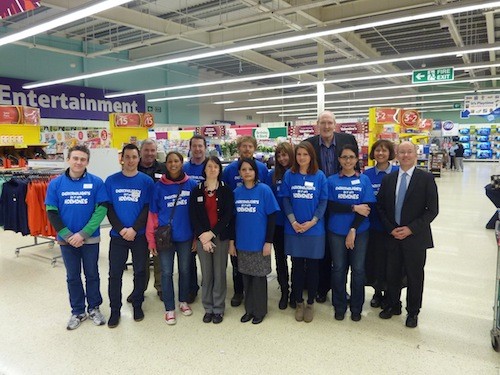 Brendan Holland (back) with researchers on a previous project.

It is estimated the man was in his late teens or early twenties when he died.

Bizarrely, locals believe a headstone put on top of where the mystery giant is buried was erected in the wrong place in the graveyard.

“We could answer a lot of questions with some DNA samples. We might be too late to help the Cruit Island giant but we can give him an identity of sorts,” added Brendan.

“I remember the day in February 1954 when the skeleton was uncovered at Sean Baile, Cruit Island by John Johnny Mhoir, Dan Paddy Bonner, Eddie Bonner under the ganger, James Campbell O’Donnell. When I came home from school, Minnie was there on a social visit with the news.

“I immediately grabbed my bike and cycled across the strand from the Chapel to Lower Cruit and there at the Aughinnis crossroads stood John Johnny Mhoir. I asked John about the amazing find and he invited me to the top of the ardān. He peeled a heavy hessian covering back, revealing this very long skeleton. I had never seen a skeleton before and I shuddered in amazement and fright at the brown bones. John then produced a measuring tape and laid it from head to toes.

“He measured it, and my recollection is, that it measured 7’ 9” and remember John marvelling at this enormous height, and wondering if it was the remains of a Dane, or a Spaniard or just a sailor, washed ashore far beyond the bounds of living memory. The spot where the remains were found is still visible today. On the top is this ardān there is a depression in the ground. It is much easier to find in Winter time when the grass is withered.

“A post-mortem was performed by Dr McGinley of Letterkenny. I recall reading an account of the inquest in which it was reported that the Pathologist, having measured the femur and the arm bones, concluded that the height as measured in the grave at 7’ 9” was correct. A giant indeed. The Pathologist also divulged that molar examination indicated the remains was that of a late adolescent.

“The remains were returned from Letterkenny to Kincasslagh where they were laid to rest after requiem Mass by Reverend Father Deegan C.C in the old graveyard Reilig Niamh Bridhge in Cruit, close to the point of discovery. A medium sized rough granite boulder, oblong in shape without inscription, was placed to mark the grave, a fitting mark on this earth for this unidentified human being.

“Sadly, in recent times, some altruistic persons removed the original granite marker and replaced it with a headstone, somewhat similar in form to the headstones marking the nearby war graves, and with an inscription suggesting that the remains buried there are those of a victim of one of the great wars. There was no evidence of such, nor speculation of such at time of internment.”