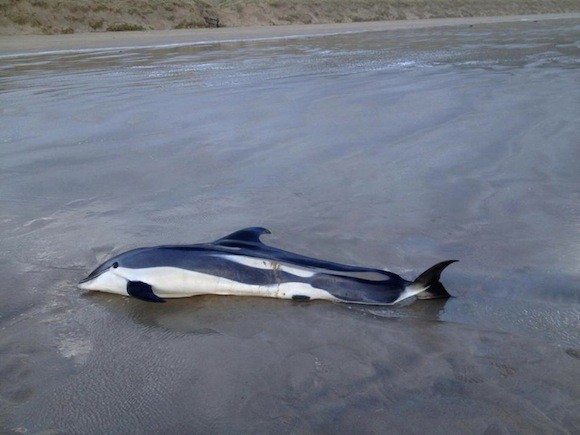 HEARTACHE AS BID TO SAVE STRANDED DOLPHIN ON DONEGAL BEACH FAILS

THERE is heartache after the valiant efforts of rescue teams to save a stranded dolphin ultimately failed.

Members of the public reported the dolphin (pictured) washed up on Tramore Strand, Dunfanaghy, at the weekend.

The Mulroy Coast Guard team and a park ranger arrived at the scene, but the helpless creature had already died.

“Team members responded to see if they could assist and get the dolphin back in the water but unfortunately the dolphin was dead,” said a spokesman for Mulroy Coast Guard.

The incident has been reported to the Irish Whale and Dolphin Group which monitors the animals.

Cetacean strandings (and especially those of common dolphins) were up significantly in January/February last year.

Due to the unusual number of strandings, the National Parks and Wildlife Service arranged for five common dolphins to be removed to Athlone for post mortem examination with a view to establishing cause of death.

Findings of the post mortems were released and showed beyond doubt that all of the examined animals had died as a result of drowning having been caught in trawl-type fishing nets.

The big question at the time was whether the numbers of cetaceans stranded in Ireland would return to a more normal level after this apparently exceptional ‘blip’.

“With the benefit of hindsight, we can now say for certain that the trend in increasing numbers of reported strandings over the last three years has certainly continued with by far the highest annual total on the IWDG Cetacean Strandings database in 2013,” said a IWDG spokesman.

The most frequently stranded cetacean reported is the common dolphin.