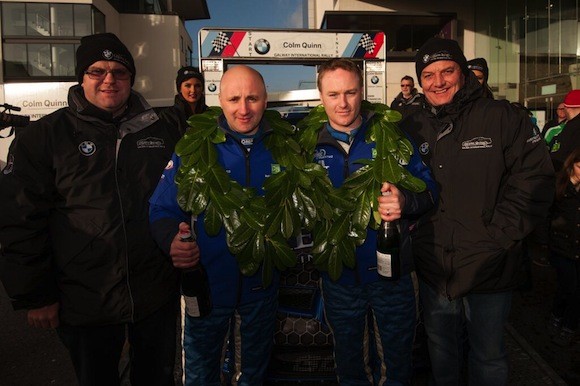 Donegal’s Declan Boyle and Brian Boyle won the Colm Quinn BMW Galway International rally today in the opening round of the Clonakilty Blackpudding Irish Tarmac Championship…on a day of success for the county.

Boyle, in his Subaru WRC, finished 25.5 seconds ahead of Garry Jennings, also in a Subaru.

Eugene Donnelly crashed his Mini WRC out of third place when in contention ending his involvement on the first stage.

The drama continued as Jennings closed to within 0.2 of a second of Boyle, who had concerns about overheating coolant that led to the car lapsing on to three cylinders.

Jennings though aquaplaned on Stage 8 and lost time but he subsequently cut the deficit to 27 seconds with three stages to go.

However, Boyle withstood the pressure and took his first International win.

Jennings was well ahead of the Ford Focus of Donagh Kelly, who claimed third on the final stage after Sam Moffett clipped a rock and damaged a wheel rim, he had to settle for fourth.

And there was a third win for Donegal competitors when Galway junior rally winners were Paul Creamer and Danny McCloskey.