A research report commissioned by Donegal County Childcare will be the key focus of two important debates in the Dáil in the coming weeks. 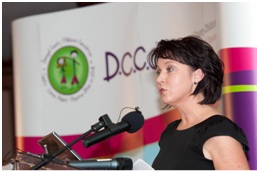 It follows the innovative research work into childcare supports for working families and the implications for employment.

The research entitled ‘Supporting Working Families – Releasing a brake on economic growth’ was carried out by Indecon International Economic Consultants for Donegal County Childcare and was launched by Minister Frances Fitzgerald in Dublin in December.

Avril McMonagle, County Childcare Manager, who initiated the research project early in 2013, has been invited to provide a presentation on the findings of the report to the Oireachtas Joint Committee on Health and Children on Thursday 20th February.

Minister Fitzgerald has already expressed her intention to be present for the presentation.

Ms. McMonagle said she is delighted the report has generated a huge amount of interest from various Government Departments.

“We already know that the findings and recommendations will be used to inform a review of childcare funding schemes during 2014. We are grateful to Sinn Fein Spokesperson for Children Caoimhghíin ó Caoláin and local TD Pádraig Mac Lochlainn for nominating us to present to the Joint Committee’.

The Donegal Report will also provide the background information for the first Private Members Business debate in the term of the current Government specifically on childcare this week.

This is being brought forward by Robert Troy, TD Fianna Fail Spokesperson for Children and local TD Charlie McConalogue.

In order to address this issue, the Fianna Fáíl led debate will provide a platform for a range of childcare related issues including increased investment and will call for the implementation of many of the proposals put forward in the Indecon Report regarding the cost of childcare.

The cost of childcare as a barrier to employment is an issue that has been debated for years without any tangible solutions being brought forward.

The report shows that thousands of working parents, particularly mothers, face a stark choice of quitting work because of the high cost of childcare, or continuing their careers while losing money.

The report puts forward key policy initiatives which could be undertaken to reduce barriers to employment which would have positive benefits for working parents in Donegal who are earning just above the threshold for family income supports.

Avril said the DCCC is particularly delighted that a Donegal based organisation has been successful in taking this crucial national issue to central government.

“For this reason we knew for the onset that not only did our report need to be evidence based and solutions focussed – most importantly it needed to be properly costed to ensure that it would be taken seriously. We are delighted that we have succeeded in doing this and that our report is now central to all future policy discussions in this area’.