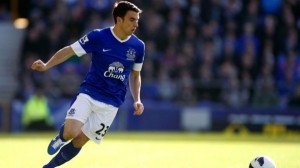 REPORTS in Britain today are again linking Seamus Coleman with a summer move to Manchester United.

The Killybegs man has been a star performer with Everton this season.

Reports say David Moyes is prepared to pay the Merseysiders Stg£20M for Coleman and a further Stg£25M for Southampton left-back Luke Shaw – taking the total spend to £45M (€54M).

Coleman is a Man United fan but is said to be very happy at Everton who are looking more likely to be playing in Europe next year than the Old Trafford side.

The Toffees travel to Spurs today where Coleman will make his return after a hamstring injury.