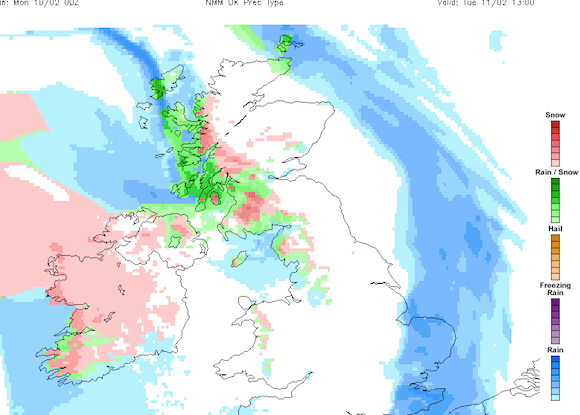 snow is forecast for the North West tomorrow

AFTER the storms of the past few weeks, forecasters say snow is now on the way to Donegal with Met Eireann issuing an ORANGE snow alert for the county.

Accumulations of snow are expected across most of the county on Tuesday as cold air from the north and west descends over the country from late tonight – with up to 6cm of snow expected.

The worst affected areas will be in the south west of Donegal.

“A band of heavy rain ( warm front ) will pass through the country tonight . Behind that , a pocket of cold air will filter in from the west, cold enough for more wintry spells tomorrow,” said the forecaster.

“Hail and sleet will be possible anywhere while some snow may accumulate for time in midlands and north. High ground elsewhere should see showers fall as snow too.”

Sky News and BBC Northern Ireland are also reporting that snow will hit us tomorrow.

Cold wintry weather expected.
Some falls of snow possibly early tonight before turning to rain, but likely to persist as snow on ground above 500ft. Rain clearing during the night, with wintry showers of sleet and snow moving into the area overnight. Cold and raw tomorrow with occasional heavy showers of hail, sleet and snow. Accumulations of 3 to 6 cm.