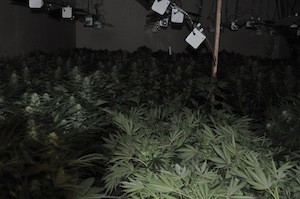 “As a result of an intelligence led operation involving the Garda National Drug Unit, Customs Revenue Enforcement Officers, and the Divisional Drug Unit Donegal, cannabis herb with an estimated street value €400,000 (subject to analysis) has been seized in Castlefin,” said a Garda spokesman.

“The seizure was made shortly after 8pm this evening.

“One male in his early 30’s has been arrested and is currently detained under section 2 of the Drug Trafficking Act 1996 in Letterkenny Garda Station.”

The spokesman said that investigations are continuing.

There is a large Garda presence in the area and follow-up operations are underway.