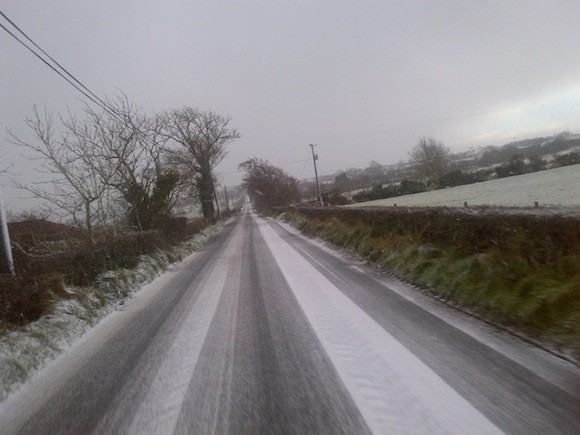 Snow-covered roads at Ballyare outside Ramelton this morning.

UPDATED 12.10pm: Drivers are warned to exercise extreme caution following a fall of snow across the county this morning.

Warnings are coming in off heavy snow falling across Inishowen including Carndonagh and Buncrana. Other areas being affected include Creeslough and Milford.

Met Eireann has warned the falls are the first of what could be a number in the next two days as temperatures plummet.

Snowfalls overnight were washed away by rain but further snow just before rush-hour caused some delays for motorists.

Although most roads are passable, motorists have been warned that there is ice in many places and to drive carefully and at a reasonable speed.

Met Eireann has issued an orange weather alert with Donegal and Leitrim expected to be hit by the heaviest falls of snow.

There are no reports of any major accidents as a result of the freezing weather.