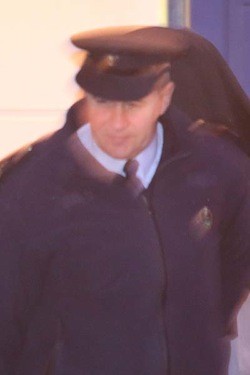 JAIL FOR THUG WHO KNOCKED DOWN GARDA, AND TRIED TO RUN OVER 2 MORE OFFICERS

A DONEGAL man who knocked a Garda down and tried to hit two others in three separate incidents has been jailed for three and a half years.

Christopher Orr being led away (covered) after sentencing at Letterkenny Court. (NewspixIrl)

Christopher Orr, from St Johnston, sent Garda Kevin Hynes into a hedge after reversing a powerful car at him, hitting the officer with a wing mirror.

Letterkenny Circuit Court heard how 22-year-old Orr, who had a string of previous convictions, was stopped by Gardai in a street off the Long Lane in the town in the early hours of August 2, 2012.

Orr had spun his car in a cul-de-sac and rammed a Garda van.

But he then reversed over Garda Hynes, sending him into a hedge.

The Garda suffered arm, hand and shoulder injuries and had to take two weeks off work, the court heard.

The incident happened just five days after Orr had driven his Ford Mondeo at Garda Stephen Moyles in the car park of The Grill nightclub in Letterkenny.

“It was a very traumatic experience for me, it is very hard to describe something like that,” Garda Hynes told the court.

“It was raining that night but I couldn’t feel the rain I was so shaken.”

The next day Orr was spotted again in Letterkenny, this time driving away from Garda Moyles despite being told to stop.

Orr pleaded guilty to 9 charges in court, one of endangerment to Garda Hynes and two for dangerous driving relating to the two incidents.

The other offences included not having a driving license and driving without insurance.

Peter Nolan, barrister representing Orr, said his client had suffered a bereavement in his life and had turned to drugs and drink. He had lost his father at a young age and an uncle in tragic circumstances.

He read a letter from Orr to the court in which he said he was now a father to a six-month-old child and hoped to change his ways.

Mr Nolan said Orr was now a “model prisoner” at Castlerea and keen to move on with his life.

Orr’s mother said the bereavements and the drink and drugs had contributed to her son’s behaviour. She said she hoped he could live with her in Greysteel, County Derry, on is release from prison.

Orr took to the stand to apologise to Garda Hynes. Earlier the garda had told the hearing he had been “handed a letter of apology in court last Thursday.”

He commented that Orr had plenty of time to apologise.

Judge Keenan Johnson jailed Orr for three and a half years, suspending the last 18 months of the sentence on condition he keep the peace for seven years on his release. The sentence will begin in August when Orr has completed a current term behind bars for other offences.

He also banned Orr from driving for 20 years.

The judge praised Gda Hynes who he said was “clearly a dedicated officer.”

He said he had to balance his sentence to show that such incidents would not be tolerated with the need to rehabilitate the offender.

As Orr was being taken back into custody Judge Johnson told him: “This is the part of this job which I dislike most, sending people to prison. I do believe you can use this time to better yourself. I wish you luck with that.”