CLLR McBREARTY CALLS FOR GARDAI TO BE REFORMED

Independent Cllr Frank McBrearty Jnr has called for the gardai to be reformed. 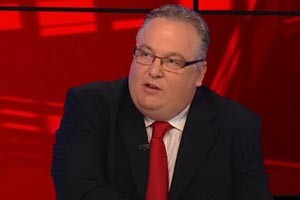 In a wide-ranging attack, the Raphoe politician has attacked many aspects of the current policing system – including the stance taken by Sinn Fein in Donegal.

This is his statement.

“I have listened to Deputy Padraig Maclochlain since he became Justice spokesperson for SF about the many issues that are affecting our Country and in particular policing.

“I can no longer sit back and be silent when I hear Deputy Maclochlain talk about GSOC and Morale in the Garda Force and his calls for the public to support An Garda Siochana.

“Deputy Maclochlain in my opinion is talking from both sides of his mouth when he says that recent high profile controversies have had a serious effect on the Morale of the frontline Gardai and although I accept this is proberly true, I don’t hear him talking about the morale of the innocent victims of Garda corruption or I don’t hear him mention the high profile controversies since the 1970s right up until the present day and I wonder why?” he said.

“I wish to point out that the vast majority of law abiding citizens do support the gardai and Law and order. The real problem that exists in our Police force have not been dealt with since the conclusion of the Morris Tribunal or has its recommendations been implemented.

“I hear Deputy Maclochlain express concern about cases recently in the county where Gardai were assaulted which I also agree is wrong. What I don’t hear is the many case’s in the past and the present where rouge elements of the Gardai have committed crimes against our law abiding citizens.

“Deputy Maclochlain in my opinion is being populist and someone in his position should be demanding that the reform needed with An Garda Siochan be implemented and that Senior Garda Management right up to the Commissioner be made accountable to the people of this country which has not happened to date.

“There are many unresolved issues in this county from serious crime such as unsolved murders and in particular the many issues that have not been exposed from the many scandals that have happened in the county which led to the biggest public inquiry into Garda Misconduct in the history of this state.

“GSOC are now going through what many of the victims of Garda corruption in Ireland have gone through. The circling of the wagons to save face for the Senior Garda Management are in motion. The bugging allegations are nothing new concerning the Gardai. You only have to look at our case to know this, as it was well known in garda circles that our phones and the phones of our Lawyers were bugged.

“I would like to see Deputy Maclochlain call on the Justice Minister Alan Shatter to establish a full independent Judicial Public inquiry into the Sophie Toscan De Plantier murder, The allegations being made by former Garda John Wilson and Sgt Maurice McCabe (who have visited me at my home in Donegal), the Murder of Eddie Fullerton and the issue’s that have not been fully investigated in Donegal which were raised in camera at the Morris Tribunal.

“If this happens, then we must ensure that the terms of reference are set to enable the inquiry to investigate the full truths of these scandals. Deputy Maclochlain and the other Justice spokesperson in the Oireachtas should be calling on the Government to reform the Garda force which will protect the honest hard working men and women of our police force into the future and where it will protect our citizens from corrupt elements within the force. The scandals that are ongoing in the garda force have to be exposed to the full and it is the duty of our Government to ensure that our police force is democratic and accountable in Modern times.

“Finally, I want to point out that Sein Fein complained about the RUC in Northern Ireland until they eventually got the reform they wanted and I am questioning why they don’t want reform of the Gardai within the force which has not been reformed since the foundation of the state. We only have to look at the recent findings in the Smithwicks tribunal against An Garda Siochana. An Injustice anywhere is a threat to Justice everywhere. Give us the change that is needed. I challenge Deputy Machlochlain to a public debate on Policing and Garda reform or any other Justice spokesperson in the Oireathas.”