A nurse from Co Donegal has accepted an MBE from Britain’s Prince Charles on behalf of all multiple sclerosis sufferers and their carers. 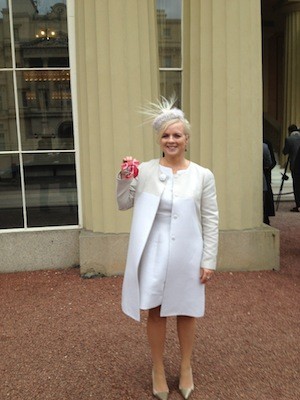 Bernadette Porter, who is originally form Raphoe, was given her award at Buckingham Palace.

Ms Porter has pioneered projects to help thousands of patients at The National Hospital for Neurology and Neurosurgery in London.

She was the first nurse in the NHS to be appointed a multiple sclerosis nurse consultant in 2003 after working at Dublin’s Richmond Hospital in the 1980s.

Bernadette, who has worked at the NHNN for nearly 25 years, said: “It was such a surprise for me to receive an award – and such an honour!

“I feel very humbled and continually feel inspired by the people I meet who face a challenging disease like MS and live their life with such dignity.”

“Around 3,000 people a year use the MS service at UCLH and it’s important to put patients at the centre of all we do. I try to really listen to what patients say about our services, to ensure they fulfil their needs.”

One of Ms Porter’s biggest dilemmas before receiving her MBE was what she was going to wear on the day!

She developed and spearheaded the use of new technology to give patients with neurological disability more control over their own lives and the care they receive.

It included: a telephone triage/advice line staffed by specialist nurses; email advice service for GPs wishing to contact a consultant neurosurgeon and a video clinic linking the neurology team with the patient and local clinical team in the patient’s community.

The original ‘NeuroResponse’ pilot in 2009 was supported by UCLH and the Young Foundation, a centre for social innovation.

Bernadette said: “It has linked up people with MS with expert clinicians and patients tell us it has improved their quality of life by giving them the confidence to manage their condition.”

“I feel privileged to work with them,” said Bernedatte who is a daughter of the late Joe and Kathleen Porter.

Bernadette also won recognition at the British Journal of Nursing Awards 2011. She was chosen by a panel of respected judges as one of the top three nurses for clinical excellence and innovation in nursing.