FARMER DESCRIBED AS ‘LUNATIC’ BY JUDGE HAS DRIVING BAN DOUBLED

A farmer who led Gardai on an 18km chase has had his driving ban doubled after he tried to appeal his case. 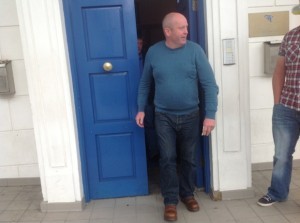 Sean Gallagher, who claimed he was taking his case on behalf of the farmers of Ireland, even threatened Gardai by telling them he knew where they lived.

The Churchill man, 44, was branded a lunatic by a judge when he appeared at Letterkenny Circuit Court to appeal a previous District Court sentence.

The unemployed father of three told Gardai when eventually stopped that they “couldn’t take the knickers off a bare a***.”

Gda Paul McGee said Gallagher drove past him despite being told to stop at the Rock Bar, Newmills, Letterkenny on April 1 last year.

Gallagher, from Cabra, Churchill, led gardai on an 18km chase, crossing both sides of the road on several occasions.

The Garda described the incident as “the worse piece of driving I’ve seen in five years in the Traffic corps.”

The accused then warned Garda McGee that he knew where he lived and that this would not be the end of the matter.

Gda McGee told Judge Keenan Johnson that Gallagher had also said: “I’m leading the fightback against you boys for the farmers of Ireland.

And he added “Sure I have a bicycle and I don’t have far to go for a drink.”

Defence barrister Peter Nolan asked to withdraw the appeal, saying he wasn’t aware Gallagher was already banned from the road for drink-driving.

However Judge Johnson refused to let the case be withdrawn.

He said Gallagher was a “lunatic” and a “scourge” the roads.

“You’re a disgrace, blighting the good name of farming people by claiming to represent them. It’s a miracle no-one was killed,” said the Judge.

He allowed the 10 month prison sentence handed down by the District Court for drink-driving, driving whilst disqualified, failing to provide a specimen of breath.

“He shouldn’t be on the roads,” he said.