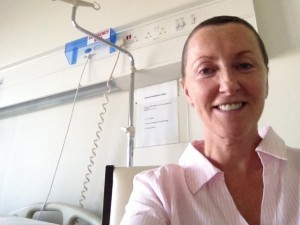 MAJELLA HAS DOUBLE MASTECTOMY BUT SAYS SHE IS FEELING ‘GREAT’

Cancer battler Majella O’Donnell has revealed she has undergone major surgery to have a double mastectomy but is feeling “great.”

Majella lets her fans know that she is recovering and feeling great after her latest operation.

Writing from her hospital bed, the wife of singer Daniel O’Donnell said she just needs plenty of rest now.

She even took a picture of herself for her fans to see!

Majella told fans on Daniel’s website website that it has been a difficult time with her sickness and the passing of her father.

“Well, it’s been a very difficult 7 months between being diagnosed with cancer and my wonderful dad passing away very suddenly. As Daniel has already told you, I had a lumpectomy in July and started Chemotherapy in September.

“I am now in hospital on day 5 after surgery for a double mastectomy with reconstruction. I feel great, thank God! It’s so good to be this far down the road and to know that all I have to do now is rest and heal,” she said.

Majella captured the imagination of the public when she appeared on the Late Late Show to have her hair shaved off.

In the process she managed to raise a remarkable €600,000 for the Irish Cancer Society.

But brave Majella said she would not have been able to get through her ordeal without the support of the Irish public.

She revealed she has received literally thousands of messages and cards on her road to recovery.

“What I want to tell you all at this stage is how very grateful I am to every one of you for everything you have done for me over the last few months.

“Please do not think that, because you haven’t heard from me, your kindness has gone unnoticed. All your prayers, good wishes, donations, gifts, mass cards, and sacred relics have been of great comfort to me. I consider myself very lucky to have so many people batting for me!

“I can honestly say that I’m out the “other side” and in good health again. Please forgive me for not answering you all personally but it would have been impossible.

“There have been 1,000′s of communications and every one was so sincerely appreciated and welcomed. I don’t want to go on about it too much but please know that I will never forget your kindness,” she said.