Daniel O’Donnell is to take a break from his singing career to do all the things he and wife Majella ever wanted to do together. 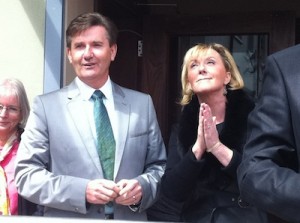 The singer revealed that after 2015 he is taking an extended break.

But the Donegal star stressed that he is NOT retiring but is not sure when he will play any concerts after that.

Danie said that Majella’s recent cancer battle has made them realise how short life is and now they want to make the most of it.

“Through all of this we have a lot of time to reflect and take stock of things and it makes us realise that life is short.

“I want to let you know at this point that I have decided to take an extended break from touring after the Gertrude Byrne Caribbean cruise finishes next February 2015.

“I can’t really say how long the break will be, but there will be no shows until at least the middle of 2016.

“For me this was a very big decision but there are a number of things that Majella and I want to do and even if we live to be 90 (which I hope we do) I don’t want to have to say “I wish we took the time to do such and such……” .

“I would like to thank you at this point also for supporting my career over the last 30 years and I hope when we get back to doing shows that I will see all of you again.”

But the Kincasslagh star added “I want to stress that “This is not retirement, it’s just a sabbatical”