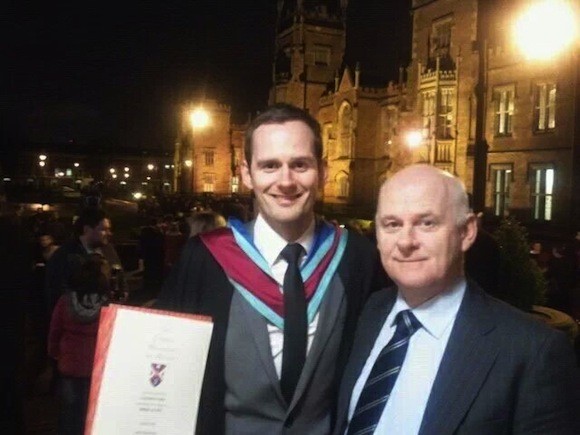 SON OF JIMMY HARTE IN UNIQUE TRIBUTE TO HIS EMBATTLED FATHER

A son of battling Donegal Senator Jimmy Harte is doing a marathon in his father’s honour.

Lochlainn Harte is preparing to undertake the Paris marathon to raise vital funds for Dublin’s Beaumont Hospital where his dad has been receiving treatment.

The Labour Party Senator was returning home from a Republic of Ireland game when he had the accident.

Son Lochlainn is now appealing for people to sponsor him in his bid to help support the hospital which is looking after his dad.

Lochlainn said: “As you know, my dad Jimmy Harte suffered a severe accident in November 2013. Since that date he has been in Beaumont Hospital and the miracle workers there have brought him back to life in my eyes.

“Dad is an avid runner and marathon enthusiast but unfortunately it may be some time before he can run one again.

“I am doing this marathon for him and for the saviours in Beaumont Hospital. I would very much appreciate your support in helping me to raise funds for this organisation.”

If you would like to help Lochlainn raise as much funds as possible for Beaumont in honour of Jimmy, please log on here and done what you can.