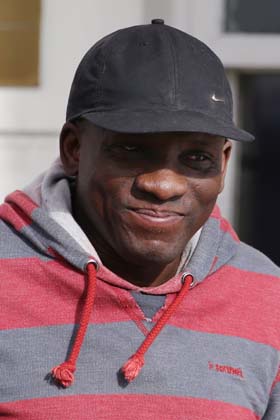 A man who almost blinded his young daughter when he threw a glass jug in a rage at his wife’s lover has escaped jail.

Prince Asamoah attacked his wife and her new partner when he entered her home in Letterkenny.

The woman and her four daughters were left terrified after the attack in the house at 84 The Grange on June 5th last.

Letterkenny District Court was told Asamoah arrived at the house and a huge argument started which saw the accused challenge his wife’s new lover to “settle this like a man.”

Asamoah, 37, of 35 Holywell Woods, Swords, Dublin picked up a chair and then a set of pliers and tried to attack the man but he was stopped.

He then threw a glass jug at him but he ducked and the jug smashed spraying his three year old daughter with glass.

The little girl needed stiches to the wound and pictures of her horrific injuries were handed into the court.

The court heard that the child has now made a good recovery and the scarring may not be to severe.

Judge Paul Kelly previously said “The photos are horrifying. Hopefully they have healed up. And luckily it doesn’t appear to have damaged her eye.”

He added “It’s a very serious incident and and it is extremely fortunate that his 3 year old daughter was not blinded in that eye. The photos we have look particularly horrific and we can only hope she makes a full recovery.”

Defence solicitor Frank Dorrian said his client had harboured hopes of a reconciliation with his wife but that was not meant to be.

He said he was very sorry and felt so guilty about hurting his daughter.

He said however that he had now moved on and realised there was no hope of getting back with his wife.

Judge Kelly said he accepts the incident happened out of a jealous rage which “sent him out of control.”

Both sentences are to run concurrently and Judge Kelly also took another charge of assault into consideration.

He also ordered Asamoah to pay €130 in compensation.