DONEGAL GETS READY TO ‘ROCK’ IT OUT 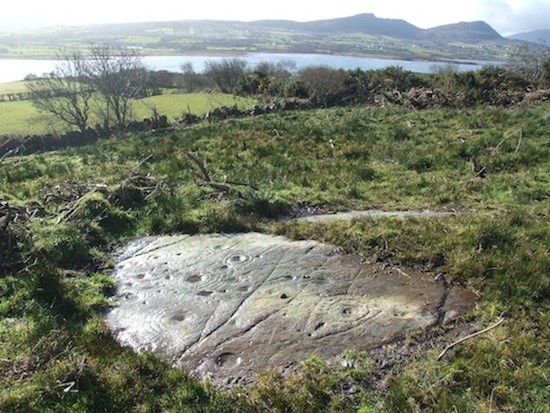 Photo 1 caption: The rediscovered rock art panel at Maghernaul, Isle of Doagh with Trawbreaga Bay in the background.

If rock is your thing then the Donegal County Museum is the place to be on March 18th.

An illustrated presentation on the prehistoric rock art provenance will be given by Carol Dempsey, Heritage Research Assistant, County Donegal Heritage Office, at 7 p.m. The presentation is free and open to the public.

“Rock art is one of the earliest forms of artistic expression and a global phenomenon that has fascinated both scholars and the public alike for centuries” said Carol.

In Ireland, rock art sites are considered to be rare monument types found widely dispersed throughout the country.

Major concentrations are known in County Kerry, in both the Dingle and Iveragh peninsulas, across County Louth and into County Monaghan, and in northern Donegal (especially the Inishowen peninsula). Surveys conducted by Brain Lacey (1983), Maarten van Hoek (1987-88), Mabel Colhoun (1995) and Blaze O’Connor (2006) have recorded approximately 160 rock art panels in County Donegal with only a small number of scattered panels located outside the Inishowen Peninsula.

The rock art, which is between 5,000 and 4,000 years old, is mostly found on schist outcrops and the decoration is usually defined by cup-like features or complex patterns of cups, rings and grooves commonly known as ‘Cup and Ring’ rock art or ‘Atlantic Rock Art’.

The illustrated presentation will consider the distribution of rock art panels in Donegal and the classification of the various rock art motifs.

The possible meaning behind the Donegal rock art panels and how they relate to the natural landscape will also be discussed as well as their preservation and how best to manage these fascinating carved stones.

“The recent rediscovery of rock art at Maghernaul on the Isle of Doagh has reignited people’s interest in the subject” explained Ms. Dempsey who recently graduated from University College Cork with an M.Phil. in Archaeology.

“It is important that people know these rock carvings exist and although the rocks are permanent, the rock art itself will not last forever. It is vital the people know how best to care and conserve these rare sites.”

Rock art sites are typically found on private land and are protected under the National Monuments Acts (1930 – 2004). Permission from the National Monuments Service, Department of Arts, Heritage and the Gaeltacht must be obtained before works are carried out on or near these particular sites. More information relating to the location and protection of our archaeological monuments can be found at www.archaeology.ie.

Photo 1 caption: The rediscovered rock art panel at Maghernaul, Isle of Doagh with Trawbreaga Bay in the background.

DONEGAL GETS READY TO ‘ROCK’ IT OUT was last modified: March 5th, 2014 by Stephen Maguire
Facebook0Tweet0LinkedIn0Print0
Tags:
County Museumdonegalrock art