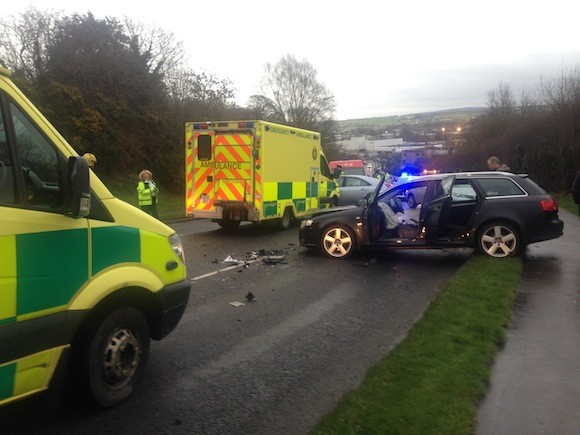 Emergency personnel at the scene of this evening’s crash in Letterkenny.

UPDATED 8.15PM – Gardai have identified a man involved in a hit-and-run in Letterkenny – after he arrived in a local petrol station wearing just one shoe!

The man was driving an unidentified car which smashed into an Audi A4 on De Valera Road close to the local fire station after 4.20pm.

At least two other cars were involved in the incident.

The car failed to remain at the scene and sped off.

However Donegal Daily has learned the driver subsequently abandoned the car.

The man, wearing only one shoe, then called into Tobin’s Garage on the Port Road asking for someone to phone him a taxi.

The man then fled the shop and jumped over a fence and rans towards the LYIT.

Gardai have called to Tobins and have downloaded CCTV footage of the man.

The accident led to serious traffic delays around the town.

The emergency services were on the scene of the incident within minutes.

It is not known yet if anyone has ben serious injured.

Gardai have appealed to anybody who was in the vicinity of the crash to contact them if they witnessed what happened.