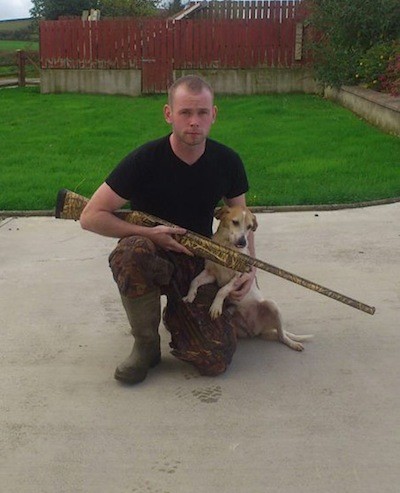 A young man said he is terrified that his stolen guns will be used to terrorise and rob more pensioners in Co Donegal. 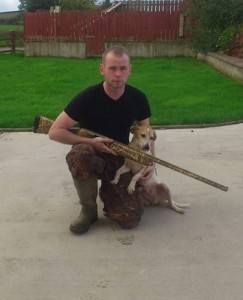 Mark Dowds with the camouflaged rifle which was one of two guns taken in the raid on his family’s home. (NW Newspix)

Hunting enthusiast Mark Dowds has been left devastated after thieves broke into his family home and stole two shotguns, a hunting knife and cartridges.

The 22 year old lives in Newtowncunningham, an area devastated by dozens of raids on the homes of pensioners in recent weeks.

The gang broke into Mark’s family home in Rooskey and used a shovel and crowbar to smash open a locked gun-chest containing his guns.

Devastated Mark told Donegal Daily “I am sickened to think that these guns could be cut down and used to terrorise old people and rob them.

“I know there’s every likelihood that this could happen and it makes me sick. Old people have suffered around here enough.

“They are terrified at night and now these scumbags have two more guns and a very sharp hunting knife they can use in their cowardly raids.”

The robbery is even more devastating for Mark as one of the guns, a Lamper Over and Under shotgun, was given to him by his father Ivor when he started to shoot.

“I simply can’t replace that gun. It has huge sentimental value. But the cowards who broke into our family home don’t care about that,” said the Moyle Gun Club member.

The gang also stole a significant sum of money which Mark had saved to celebrate his 23rd birthday this weekend with friends.

Gardai are hunting the gang behind the raid which happened between 1 and 2pm on Wednesday afternoon.

A local farmer spotted a green or blue car with a Northern Ireland registration acting suspiciously in the area at the time.

As well as nightly patrols in the area, local residents have set up text alert schemes and provided alarms and sensor lights for the elderly at cost price.

A recent meeting to discuss the burglary crisis in the was attended by more than 1,500 people and a €10,000 bounty was offered to catch the gang.

Mark said he has no qualms in saying what he would have done had he have walked in on the burglars ransacking his family home.

“They may have walked in but they wouldn’t have been walking out. It’s as simple as that.

“The aw is on the side of these people and the Gardai simply don’t have the resources to catch them.

“It’s going to take a serious incident and I mean one of these people getting badly hurt during a burglary to send the message out.

“People are sick of being preyed upon. I will never forget what these people did to my home but if they do it again I will be ready,” he said.