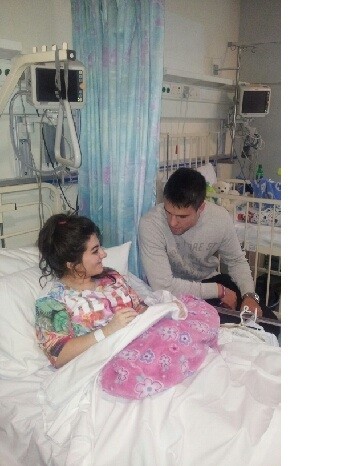 A young Donegal woman has received a much needed boost before surgery after getting a surprise visit from Irish rugby star Conor Murray.

Rugby star Conor chatting with Vanessa before her latest operation.

The 17 year old is currently in Temple Street Hospital in Dublin after breaking both her femurs after tripping on St Valentine’s night.

But her spirits were lifted when sporting star Conor called in to see her and chatted to her at her bedside.

Vanessa’s dad Paul, the well-known local county councillor, said he and wife Stephanie were delighted by the visit.

“We are used to hearing al the negative stuff but this was the other side of life that we don’t read about.

“He is on the eve of a big game and yet he took the time out to visit Vanessa and other patients.

“He was a lovely guy and I just wanted to say thank you to him for giving his time up,” said Paul.

Vanessa, a fifth year student at Loreto Convent in Letterkenny, is keeping her chin up ahead of her surgery later today.

Dad Paul added “Vanessa has a great outlook on life and despite all her breaks, she is always in good form.”