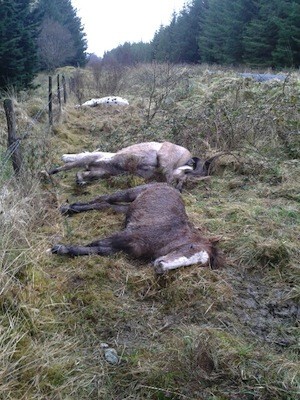 This is the brutal scene after Department of Agriculture officials were forced to put down three stray horses in Co Donegal.

The three horses after they were put down.

The abandoned horses, which included a yearling, were found in a poor state of health on the outskirts of Ballybofey.

The horses were found wandering on a public road in the townland of Croachonagh.

The horses were in a bad state of lameness, had bad feet and were a danger to themselves and to the public.

It is understood one of the horses had been struck by a vehicle.

A vet from the Department of Agriculture was called and he made a decision to put down the animals.

Inspector McGinley told Donegal Daily the decision to put the horses to sleep was the only option they had been left with.

And he revealed that because the horses were not micro-chipped, it is unlikely that their owner will be located.

He added that the horses were humanely put to sleep on welfare grounds.

“The horses were in a very poor state overall and the decision to put them down was taken in their best interest.

“Their feet where in a very poor condition, they were lame and we suspect one of them had probably been hit by a car.

“A decision to put down any animal is never taken lightly but the decision was taken on welfare grounds,” he said.

Mr McGinley said they would still like to discover the origin of the horses.

ANIMAL WELFARE BOSSES SAY THEY WERE FORCED TO PUT DOWN STRAY HORSES was last modified: March 8th, 2014 by Stephen Maguire